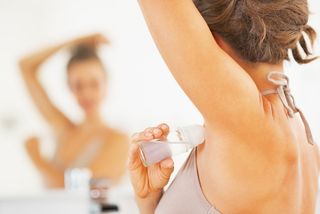 If you're an antiperspirant user, you probably slather on the stuff in order to wipe out odor-causing bacteria. A new study suggests that your methods work. But they also make your underarms a more diverse place to be.

The use of antiperspirants and deodorant alter the skin microbiome, according to a new open-access study published in the journal PeerJ on Tuesday (Feb. 2). Antiperspirants reduce the total number of bacteria dramatically, but seem to leave a more diverse group of survivors than what is seen on the underarms of people who use just deodorant or nothing at all.

There's no known health effect of this alteration. Antiperspirants and deodorants have been subject to suspicion for causing cancer, but the National Cancer Institute has found no evidence of a link. Nor have studies backed up speculation of a link between the aluminum in antiperspirants and Alzheimer's, another popular concern.

"Ultimately, we want to know if any changes in our microbial ecosystem are good or bad, but first we have to know what the landscape looks like and how our daily habits change it," study researcher Julie Horvath, who heads the genomics and microbiology research lab at North Carolina's Museum of Natural Sciences, part of NC State University, said in a statement. [Body Bugs: 5 Surprising Facts About Your Microbiome]

As many as 90 percent of Americans use antiperspirants or deodorants, according to a 2001 article published in the journal Clinics in Dermatology. Antiperspirants use aluminum salts to block sweat glands, reducing perspiration and depriving odor-causing bacteria of the nutrients they need to survive. Deodorants use antimicrobial substances to kill off bacteria directly.

Given the bacteria-killing goals of these products, it was no surprise to see changes to the underarm microbiome with their use. Researchers asked 17 people to undergo armpit swabs for eight days straight. On the first day, they were instructed to follow their underarm routine as usual. Some participants used antiperspirant, some deodorant and some nothing at all. On days two through six, the participants were instructed to use nothing at all. Finally, on days seven and eight, all participants applied an antiperspirant (Secret Powder Fresh for women and Old Spice Fiji for men).

Participants were instructed to bathe or shower as usual, which they did with an impressive range of between three and 14 times a week. Researchers then cultured the bacteria found in each person's underarms on each day, and sequenced the bacterial genomes to find out what species were present. [Get a Whiff of This: Man Hasn't Showered in 12 Years]

Unsurprisingly, everyone's armpits became livelier after they quit using the antiperspirant or deodorant, with statistically significant increases in bacterial abundance by day four of the experiment. These thriving communities collapsed after participants applied antiperspirant in the final two days of the study. Underarms were home to an average of 750 colony-forming units of bacteria on the last product-free day of the study. This plummeted to 73, on average, on the first day of antiperspirant use, and to a mere 25 colony-forming units on the second day of use.

The diversity of you

More intriguing were the effects on bacterial diversity. The researchers found 22 species of bacteria on each participant, on average, and a total of 106 among all 17 study subjects from samples taken two days and five days after discontinuing antiperspirants and deodorants. People who initially did not use underarm products were hosts mostly to the Corynebacterium species — which happens to be the group of bacteria that's most associated with body odors. The underarm microbiomes of these people consisted of 62 percent Corynebacterium, 21 percent Staphylococcaceae, 8 percent Anaerococcus and 9 percent bacteria from other genuses after two and five days of stopping product use.

Those who had used deodorant at the beginning of the study showed a pattern in which the odor-causing bacteria and the common skin bacteria group Staphylococcaceae swapped. After two and five days of stopping use, deodorant users' microbiomes were 29 percent Corynebacterium, 61 percent Staphylococcaceae, 5 percent Anaerococcus and 5 percent other.

Antiperspirant users, on the other hand, were hosts to communities of 60 percent Staphylococcaceae, 14 percent stinky Corynebacterium, 4 percent Anaerococcus and 22 percent other — making for a more diverse assemblage.

"Using antiperspirant and deodorant completely rearranges the microbial ecosystem of your skin — what's living on us and in what amounts," Horvath said.

There were limitations to the study, such as its small size and the relatively short time period covered, the researchers wrote in PeerJ. The methods used to culture the bacteria may also have introduced biases into the measures of bacterial abundance. Race and gender of product users might matter as well; previous research has found that while most Caucasians have a gene that encourages stinky pits by contributing to a sweat compound preferred by odor-causing bacteria, most East Asians don't.

Presumably, the bacteria that survive despite antiperspirant and deodorant use aren't those that evolved alongside humans (or under their arms, in this case), the researchers wrote. The health effect of altering this microbiome could be good, bad or neutral.

"We really don't know at this point," Horvath said. "Those are questions that we're potentially interested in exploring."