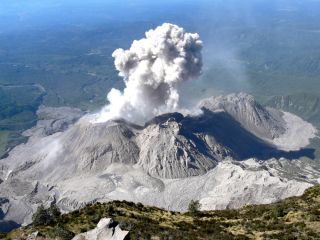 Bird's-eye view of one of the hourly eruptions at Santiaguito in Guatemala.
(Image: © Jeffrey Johnson)

The next time you're served a flat Coke, impress your friends with volcano jargon. Complain to the waiter that your beverage is "depleted of volatiles." Then, suggest that if the cola were to be heated, its solubility might drop, catalyzing bubble growth, which would result in improved taste and/or a "paroxysmal eruption."

If they're still listening, tell them that this is what occurs in volcanoes. A new article published in the journal Nature recently demonstrated the "critical influence of heat variations in rising magmas" — meaning previously unappreciated temperature changes appear to control the occurrence, and explosivity, of eruptions.

Volcanoes erupt explosively when gas-charged magma reaches Earth's surface. Volcanologists refer to magmatic gases as volatiles because the amount of those gases within the rising magma determines whether a volcano explodes (in a volatile fashion) or effuses lazily.

But they all consider what happens to a parcel of magma as it rises toward, and breaks apart at, a volcano's vent.

Magma deep within a volcano starts its ascent slowly, but eventually, it accelerates toward the Earth's surface. This happens because as magma rises it escapes from crushing overpressure and bubbles grow. The magma's environment changes dramatically, and so does the character of the molten rock, including — most vitally — the amount of volcanic gas that fuels explosivity.

Let's imagine magma's journey starting about 2 miles, or roughly 3 kilometers, below a volcanic vent. This is approximately the depth of a large volcano's base, and the pressures there are intense: Magma at this depth is subjected to nearly a thousand times the pressure that exists in the atmosphere. As a result, the magma travels through long fractures or sheetlike "dikes," rather than pipelike conduits that prevail near the surface. As the magma flows, the surrounding colder rock is cracked apart several inches, or maybe a couple of feet, allowing the magma to pass through.

At such depths, the magma is an extremely viscous fluid, often (but not always) swimming with crystals, but largely it is devoid of bubbles. The absence of bubbles doesn't mean there is no gas, but that it is mostly tied up, or dissolved, within the magma. At least 1 percent (and potentially as much as 5 percent) of the mass of magma at this depth will be invisible, locked-in gas.

While these gas amounts may not seem too significant, think of, for example, if magma were to fill 1 percent of the mass of a small hot tub's contents. It would contain more than 50 lbs. (roughly 20 kilograms) of gas, which, if expanded catastrophically — as is typical during volcanic eruptions — equates to the energy released by about 50 lbs. of exploding TNT, or about 100 megajoules of energy.

Magma, even when devoid of bubbles, ascends because of buoyancy. Because it is somewhat less dense than the colder rock surrounding it, it kind of floats its way upward.

At first, it may rise sluggishly, but as the magma reaches shallower levels, it can accelerate. Significant changes occur in the melt as the confining pressure diminishes. More bubbles start to appear, and they serve to diminish the overall density of the fluid. As these bubbles expand, the density decreases further. Buoyancy then increases, facilitating a quicker ascent, enhanced bubble creation and expansion. This feedback causes the density to drop and the buoyancy to increase.

This cycle continues until the magma is ripped apart. Those once-invisible bubbles rend the surrounding magma to shreds, and gas, ash and any piece of the volcano in the way is blown out of the crater.

Such pressure-controlled degassing has been the standard scientific model for explosive eruptions. But now, Yan Lavallée, Professor within the School of Environmental Sciences at the University of Liverpool in England, has introduced a major tweak to that model. In a new paper in the journal Nature entitled "Thermal vesiculation during volcanic eruptions."

Lavallée has demonstrated that while decompressing magma is prone to degas, it further degasses when it heats up. And it probably heats up and degasses a lot more than scientists have thought.

Scientists agree that, for magma to exist in melted form, rather than as a solid rock, it must be hot. On average, magma is approximately 2,000 degrees Fahrenheit, or around 1,000 degrees Celsius.

Less commonly recognized, however, is that magma can get quite a bit hotter via two processes that exist in most volcano conduits.

Firstly, magma gives off heat when portions of it start to freeze. Just like in water, the freezing produces crystals, and as the crystals form, they give off heat. A cubic centimeter (about 0.06 cubic inches) of "freezing" crystals, like quartz, will heat a kilogram (about 2.2. lbs.) of surrounding magma by 5 degrees C (9 degrees F). That added heat can induce gas to come out of the fluid magma.

Secondly, magma will heat up as it flows through constricted conduits. As viscous fluids are forced through cracks or narrow pipes, the flowing rock releases heat due to friction. Supersticky magma flowing into a crack is sort of like taffy being squeezed through the small-bore needle of a syringe. The taffy would also heat up and become more runny.

Lavallée, who was the lead researcher on the study, and his colleagues, suggest significant heating causes those processes, merging geologists' pre-existing understanding of geophysical constraints with analyses of rock samples and laboratory simulations of the processes.

Of volcanoes and evidence

Back in 2013, Lavallée scaled the dome of Santiaguito, an active volcano in Guatemala, to search for rocks that bear testament to frictional heating.

The dome's gray surface is a jumbled collection of house-size rock spines, extruded over the last decades, and is — in some places — still extruding. Immense blocks have been squeezed toward the surface as an incredibly sticky, viscous magma. In the process, these rocks broke and cracked before later annealing from continued exposure to the intense heat (around 1000 degrees C) inside the volcano.

Lavallée searched the dome lavas for these healed cracks, which he hypothesized would represent fossil passageways of escaping gas. When he returned to his laboratory, he found his evidence: Under an electron microscope, the textures of these annealed cracks revealed ash shards frozen in place following their transport by currents of hot gas originating on the cracks' margins.

Spectacular laboratory experiments also supported the theory. Lavallée and his colleagues took fist-size rock samples of lava and pushed them together with tremendous force, then rotated one rock sample slowly against another. This generated intense friction and heat   — enough to melt rock and release copious, previously locked-in gas.

The last piece of the puzzle ties the whole story together: Lavallée's geophysicist partners studied a nearby portion of Santiaguito's dome, located a quarter mile (about 0.4 km) away from where the samples were collected. This dome was actively erupting when the team visited, and approximately once per hour, the dome surface and its interior would lurch upward, forcing the viscous rock to flow and internally deform.

Viewed from a safe vantage point, the periodic activity was spectacular. Within seconds of an eruption's onset, columns of ash and gas plumes rise to hundreds of meters and eventually reach more than a kilometer high. Incandescent blocks the size of microwave ovens are blown skyward and then crash onto the volcano's flanks, breaking open and cascading downward.

The geophysicists captured the associated, subtle, underground movements at Santiaguito using an array of instruments, including seismometers (which measure movements in the ground) and tiltmeters (which measure the tilting of the Earth's surface). These sensors reveal the depth and magnitude of rock movement — data the researchers used to estimate the amount of gas that accumulates during eruptive cycles.

According to Lavallée's theory, his rock and magma movements can induce temperature gains of hundreds of degrees, promoting volatilization of the previously "flat" magma and subsequent violent degassing. The dome rocks and eruptions at Santiaguito serve as tantalizing evidence of how frictional heating can lead to volcanic explosions.

In most ways, Santiaguito lava and flat cola are horrible analogues. Nonetheless, Santiaguito's behavior offers insight toward understanding vital processes that influence volcanic explosivity at other analogous volcanoes — findings at the Santiaguito volcano laboratory are revealing the dynamics of hazardous, dome volcanoes across the globe.