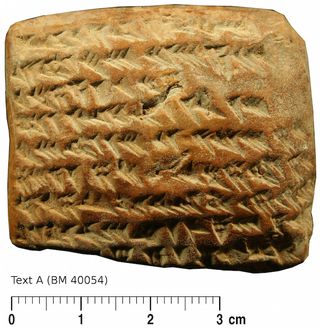 BERLIN — For a text that may rewrite the history of mathematics, it looks rather sloppy.

The brown clay tablet, which could fit in the palm of your hand, is scrawled with hasty, highly abbreviated cuneiform characters. And, according to science historian Mathieu Ossendrijver, it proves that the ancient Babylonians used a complex geometrical model that looks like a rudimentary form of integral calculus to calculate the path of Jupiter. Scientists previously thought this mathematical technique was invented in medieval Europe.

"It sounds minute for a layperson, but this geometry is of a very special kind that is not found anywhere else, for instance, in ancient Greek astronomy," Ossendrijver said. "It is an application in astronomy that was totally new. Thus far everybody thought Babylonian scholars only computed with numbers." [The 7 Most Mysterious Archaeological Finds on Earth]

The tablet has long been in the collection at the British Museum in London, and it was likely created in Babylon (located in modern-day Iraq) between 350 and 50 B.C. Ossendrijver recently deciphered the text, and he described his discovery in an article that's featured on the cover of the journal Science this week.

From his office at Humboldt University here in Berlin, which is decorated with posters of both the Ishtar Gate and the Antikythera mechanism (thought to be the world's oldest known computer), he explained that the tablet plots the apparent decreasing velocity of Jupiter from the planet's first appearance along the horizon, to 60 days later, and then 120 days later. If drawn on a graph, this relationship is represented in the shape of two conjoined trapezoids. The area of each trapezoid describes Jupiter's total displacement (measured in degrees) along the ecliptic, or the path of the sun.

"It's not an actual trapezoid that describes the shape of a field, or some configuration of the planets in space," Ossendrijver told Live Science. "It's a configuration in a mathematical space. It's a highly abstract application."

Ancient Greek mathematicians and astronomers were using geometry around the same time, but only to make calculations involving real, 3D space, such as using circles torepresent the orbits of planets around Earth. Students of math might take it for granted today, but the abstract use of geometry was, until now, unheard of at the time.

"Anyone who has studied physics or a little bit of math is familiar with making graphs — plotting one quantity against time — but actually this had to be invented once," Ossendrijver said.

Current textbooks on the history of math say this invention took place around A.D. 1350. In the mid-14th century, mathematicians at Merton College in England who were referred to as the "Oxford Calculators," and another scholar collaborating with them in Paris, were interested in understanding the velocity and displacement of an object over time. They came up with the Merton mean speed theorem, which holds that the distance a uniformly accelerating body travels in a given interval of time is the same distance it would travel if it were moving at a constant velocity (with that constant velocity being the average of the accelerating body's initial and final velocity). [Images: The World's 11 Most Beautiful Calculations]

But the mean speed theorem now seems to be a reinvention of a lost model; about 1,400 years earlier, it seems the Babylonians had their own technique to make calculations based on this principle.

"When I looked at the text, I was immediately convinced," said Jens Høyrup, an expert in Babylonian mathematics at Roskilde University in Denmark, who was not involved in the new study. "There are words that indisputably point to geometric understanding — not a geometric model of how the planets move, but a geometric technique to make some arithmetic calculations."

To build its collection in the 19th century, the British Museum gathered crates of clay tablets by methods that would not be considered scientifically sound today; namely, buying artifacts that had been dug up around Babylon and Uruk without any archaeological context. Since the 1880s, scholars have been making sense of the astronomical concepts described on many of the tablets. [See Images of Ancient Babylonian Cuneiform Texts]

Four of these astronomical tablets had stumped historians, because they included computations mentioning trapezoids, even though the Babylonians had never been known to use geometry in their astronomical calculations.

The newly deciphered tablet was essentially the missing piece in the puzzle. Last year, a colleague handed Ossendrijver a stack of photographs, including an image of a tablet he had never seen before in the British Museum. In September, Ossendrijver went to London to hold it in his hand and read it himself, confirming what he already suspected the calculations describe.

"Actually, this particular tablet has ugly handwriting," Ossendrijver said. "It's slanted. It's like cursive if it were written very rapidly. It's very abbreviated. He left out everything that is not absolutely necessary to follow the computation."

Jupiter is not even mentioned in the newly deciphered tablet, but the computations it describes were already partly known from the other trapezoid tablets that do mention Jupiter, Ossendrijver said.

The period between 400 and 200 B.C. might be considered the last period of innovations in Babylonian science, Ossendrijver said, and this is the time the zodiac and the horoscope were invented.

In general, the question of what the ancient Babylonians did with their astronomy is not fully answered, Ossendrijversaid. But they believed everything that happened on Earth was connected to whatever was happening in the sky.

"It was thought that if you are able to predict the motion of Jupiter, you would also be able to predict the price of grain, the weather, the level of the river Euphrates," Ossendrijver said. Part of his work also involves trying to understand the social context of Babylonian astronomers, and learning more about the kind of families and elite clans they belonged to. Certainly, the job description for an astronomer was much different 2,000 years ago.

Before the rise of personal horoscopes, astrology was a state affair. A court astrologer would have been called upon to interpret omens and predict plagues or other events, which could have real-world consequences. For instance, Høyrup said, if the astrologer was certain the king was going to die, the Babylonians could install a proxy king for six months, kill him at the end of his service, and let the original king return to the throne.

"The purpose of all this refined astronomy is astrology," Høyrup said. "They never speak about themselves in a way that suggests that they were pure astronomers or mathematicians; their profession was to be scholar-priests."