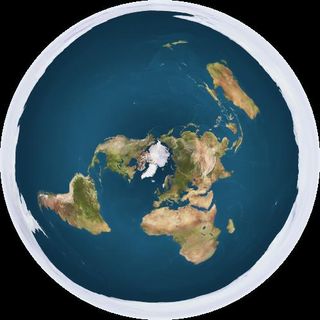 In this depiction of what a flat Earth would look like, Antarctica is represented as a layer of ice surrounding a disc-shaped Earth.
(Image: © Creative Commons 1.0 Generic/Trekky0623)

A throwdown between a rapper and an astrophysicist centers on whether the Earth is a sphere, a scientific question that was supposedly settled in the third century B.C.

Rapper-singer Bobby Ray Simmons Jr. (known as B.o.B) released a track called "Flatline" on Monday (Jan. 25), dissing noted astrophysicist Neil deGrasse Tyson after the two had engaged in a Twitter argument over Earth's shape, which B.o.B purports to be flat. In the track, B.o.B hollers, "Aye, Neil Tyson need to loosen up his vest / They'll probably write that man one hell of a check," and even embeds part of a talk by Tyson in which he says, "So it's not actually a sphere, it's an ... it's oblate, it's officially an oblate spheroid."

Earth's oblate spherical-ness was determined long ago. While the ancient Greeks were among the first to discern that the Earth is a sphere, there were still people who didn't think it could be true, because, well, look around. The ground is flat and plainly so all the way to the horizon. [Religion and Science: 6 Visions of Earth's Core]

This common-sense reasoning is, in part, what drives more modern flat-Earth beliefs. In the last century a whole society — the Flat Earth Society — has grown up around it. The 19th-century version was called the Zetetic Society, which eventually disbanded.

So what do flat-Earthers really believe? A look at the Flat Earth Society website gives some answers here. Their model of the Earth looks something like the logo of the United Nations, with the North Pole at the center. The Earth is a round disc, surrounded by an ice wall (Antarctica, which the U.N. logo doesn't show). The sun and moon are each about 32 miles across, and hang about 3,000 miles above the surface of the Earth.

Gravity doesn't enter into their argument, because flat-Earth cosmology says the whole disc is accelerating at exactly 32 feet per second in the "up" direction.

There are several lines of evidence, though, that the Earth is round. But first, we can look at why it appears flat, and why that misled people for so long. [Earth from Above: 101 Stunning Images from Orbit]

The Earth is a sphere about 24,000 miles (38,624 kilometers) around at the equator — a pretty big number relative to a person's visual abilities. To calculate the distance one could expect to see, multiply the diameter of the Earth (about 7,917 miles, or 12,742 km) by the height of the person (or building, or mountain one is standing on) and take the square root. For a 6-foot-tall person standing on a beach, that works out to about 3 miles. (A more rough-and-ready version of this says the horizon in miles will be 1.22 times the square root of the height in feet.) This is also why the distance one can see gets larger the higher up you go.

This assumes a perfectly spherical Earth (it isn't) and no refraction of light from the atmosphere (there is some). But as a general estimate this works pretty well, and explains why the Earth looks flat: The "drop" on the horizon due to the planet's curvature is only a few feet per mile.

There are other lines of evidence, and that gets us to the ancient Greeks. Specifically, a man named Eratosthenes, who lived in Syene, Egypt. On the summer solstice, Eratosthenes had seen that a well had no shadows: the sun was at its zenith. He deduced that if the Earth were spherical, he could figure out the planet's size by checking the angle of the sun at some other location, assuming the sun was so far away that its rays were essentially parallel. So, in about 240 B.C., he had someone measure the distance between Syene (modern-day Aswan) and Alexandria, and checked the angle of the sun at both locations. He found a small, measurable difference in the angle, and calculated that the Earth was 24,662 to 28,968 miles in circumference, according to scientists today. He was wrong, but not by much.

By about A.D. 1, the idea of a spherical Earth was taken as a matter of course almost everywhere; Indian astronomers were convinced, and Islamic scholars used the concept to calculate the direction and distance to Mecca, according to the work of David A. King, a former professor of the history of science at Johann Wolfgang Goethe University in Berlin.

Even Christopher Columbus knew the Earth was round — the old story of him having to convince anyone otherwise is a myth (popularized by Washington Irving in a biography of Columbus). The real problem was that his estimates of the distance to China were too low. Contemporaries thought his mission was suicidal, because the crews would die of thirst absent stumbling on a hitherto unknown source of fresh water (as noted by Samuel Elliot Morrison, who wrote a Pulitzer-Prize winning biography of Columbus in 1942). Ferdinand Magellan, of course, killed the flat-Earth idea once and for all by sailing all the way around the world.

The modern flat-Earthers can trace their intellectual lineage to a man named Samuel Rowbotham (1816–1884). He published a book on the flatness of the Earth called "Zetetic Astronomy: Earth Not a Globe." When he died those ideas lived on, as a woman named Lady Elizabeth Blount founded the Universal Zetetic Society. The society petered out after World War I. The current Flat Earth Society is headed by a man named Daniel Shenton, and has a website outlining experiments that purportedly show the Earth is flat.

One such experiment involves using a 6-mile length of canal to show that the Earth is not, in fact, round, disputing the old saw that ships' hulls disappear below the horizon and would not if the Earth were not curved. It's called the Bedford Level Experiment. A supporter of Rowbotham's used a telescope to observe a boat rowing away; since the hull of the boat remained visible even though it was 6 miles distant, it was initially taken to prove that the observation of ships' hulls was wrong, and a trick of perspective. The naturalist Alfred Russell Wallace repeated the experiment, and took into account the refraction of the atmosphere, by setting his sight line higher. He showed that, yes, in fact, the Earth is a sphere, as published in Nature in April 1870.

One other way to prove that there's a horizon is, in fact, with a good telescope. If the Earth were flat, then even if perspective made it hard to resolve objects near the horizon (it does), then with a decent telescope one should be able to see, for example, the Welsh coast from Boston. But you can't; no matter how good the telescope is, Europe never comes into view.

That aside, flat-Earthers have come up with some other — rather ingenious — "proofs" that the Earth is flat. One is the distances around the Southern Ocean. The flat-Earth model says that the distance between, say, Melbourne, Australia, and Santiago, Chile, should be greater than the distance between New York and Beijing. Melbourne is 7,002 miles (11,268 km) from Santiago, while New York is 6, 824 miles (10,982 km) from Beijing. Rowbotham gives some distance estimates in his book; the problem is they are just wrong: "From near Cape Horn, Chile to Port Philip in Melbourne, Australia the distance is 9,000 miles," Rowbotham writes. It's actually 5,681 miles. Rowbotham's figure would apply to a flat Earth, but he assumes that at the outset. Leaving the distance estimate aside, he assumes the longitudes are separated by 143 degrees; the actual figure is about 149 degrees.

If the travel distance doesn't give Earth's curvature away, eclipses surely would: An interesting artifact of Eratosthenes' calculation is that if you assume the Earth is flat the figure for how high the sun would be matches the radius of the Earth — in this case, you assume that the sun's rays are not parallel (as Eratosthenes did) but are emanating from a spherical sun a short distance away. But the fact that eclipses happen gives the game away; if the planet were flat there would be nothing to cast a shadow, say, across the sun or moon. The Flat Earth Wiki says it's a "shadow object" and posits that the reason nobody has ever seen this behemoth object on Earth is that the sun's glare blots out everything else in the sky during the day. Plenty of people have observed Venus, for example, during the day (it's hard, but it can be done). If there were some shadow object big enough — remember flat-Earthers think the moon is some 32 miles across — it has to find a way to be invisible during both day and night. [See Photos: 'Lost' Astronomy Plates Show Historic Eclipse and More]

That links to another issue: The Pole Star gets lower in the sky as one travels south, and eventually dips below the horizon. If the Earth were flat no matter how far you went, Polaris would never get below the horizon at all, nor would new stars become visible as you traveled south – they certainly would not rise above the horizon at a constant rate of 1 degree for every degree of latitude traveled south, because of the geometry of a flat Earth, and flat sky.

Flat-Earthers assert precisely that, though: The stars are actually only 3,100 miles above us, and seeing Polaris approach the horizon is a trick of perspective. So as you travel south, more come into view. But were that the case, you would not see stars coming over a horizon; the southern stars would look bunched together in a kind of bright band that covered the southern sky — precisely because of perspective. (This assumes a flat sky as opposed to a dome shape, which is the only way the argument can work.)

According to flat-Earth cosmology, Antarctica is actually an ice wall that keeps the water in the oceans in place, and that NASA employees (among other government conspirators) are guarding the place to keep people out. Explorer Roald Amundsen was faking it (or badly mistaken), and clearly the dozens of expeditions to the region were all in on the conspiracy to hide the edges of the Earth, according to flat-Earth beliefs. The moon missions, by the way, are a hoax, and GPS satellites are rigged somehow to show the Earth is round, though it's unclear how they could stop anyone from flying or sailing in directions that would disprove that.

In addition, if the Earth were accelerating enough to produce the illusion of gravity, then eventually it would approach (but not quite reach) the speed of light, according to the theory of relativity. More interesting, the mass would continually increase (relative to the rest of the universe). But flat-Earth cosmology doesn't seem to include gravity, so it's also not clear whether they buy relativity at all.