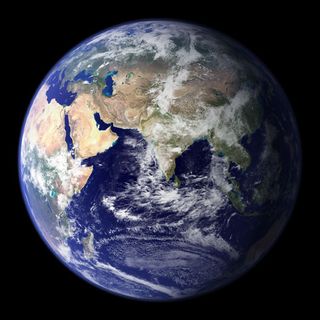 By now, most people agree that we live on a round planet. But deep down, scientists find that many still think about the Earth as if it were flat.

Researchers asked 44 people to estimate, in kilometers, the distances between six cities on different continents, without looking at a map. They found that many people made these calculations as if the Earth were a flat plane, rather than a round sphere. (In fact, the Earth isn't quite a perfect sphere; it's more like a squashed beach ball.)

According to the study, those most likely to accurately picture the Earth as round are people who've had personal experiences with the curvature of the Earth.

"Ninety-nine percent of all people think that of course the Earth is round, because they have learned it in school," said study researcher Claus-Christian Carbon of Germany's University of Bamberg. "But the thing is, this doesn’t solve the cognitive problem of whether people really base calculations of routes on such a model."

While this misconception doesn't matter much if you're estimating the distance from, say, New Jersey to New York, if you're charting a path from New York to Paris it makes quite a bit of difference. In the study, participants were asked to estimate the distances between Los Angeles; Berlin; Rio de Janeiro, Brazil; Cape Town, South Africa; and Sydney, Australia.

The researchers found that about half of respondents' answers were consistent with a flat Earth, while the other half were more accurate and consistent with a round planet. The participants' education level or background made no apparent difference to their ability to correctly estimate these distances.

"What we found was really a very big surprise for us, because I had the feeling that most estimations are based of course on a spherical world," Carbon told LiveScience. "The fantastic thing was, it does not matter at all whether you have a very good geographical knowledge."

The only predictor of a person's accuracy that the study showed was whether or not people had a personal experience of the Earth as a globe.

Some participants said they had had moments in their lives when they observed the curvature of the Earth from a plane, or watched a boat sinking over the horizon at the beach. People who could recall such experiences apparently retained this knowledge and continued to visualize the planet as round when calculating large-scale distances.

Carbon compared the phenomenon to a person being told not to touch a hot stove. Most people must first try touching the stove when they are young to fully comprehend how hot and dangerous the stove really is.

The finding could have implications for teaching methods about geography as well as many other concepts, he said.

The study is detailed in the latest issue of Elsevier's journal Cognition.