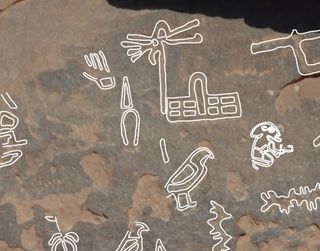 The hieroglyphic symbol at top, showing what looks like a rod with many arms beside a building, is the name for a queen called Neith-Hotep.
(Image: © Photo and drawings courtesy D. Laisney)

About 60 drawings and hieroglyphic inscriptions, dating back around 5,000 years, have been discovered at a site called Wadi Ameyra in Egypt’s Sinai Desert. Carved in stone, they were created by mining expeditions sent out by early Egyptian pharaohs, archaeologists say.

They reveal new information on the early pharaohs. For instance, one inscription the researchers found tells of a queen named Neith-Hotep who ruled Egypt 5,000 years ago as regent to a young pharaoh named Djer.

Archaeologists estimate that the earliest carvings at Wadi Ameyra date back around 5,200 years, while the most recent date to the reign of a pharaoh named Nebre, who ruled about 4,800 years ago. [See Photos of the Egyptian Drawings and Hieroglyphics]

The "inscriptions are probably a way to proclaim that the Egyptian state owned the area," team leader Pierre Tallet, a professor at Université Paris-Sorbonne, told Live Science.

He explained that south of Wadi Ameyra, the ancient expeditions would have mined turquoise and copper. Sometime after Nebre's rule, the route of the expeditions changed, bypassing Wadi Ameyra, he said.

The inscriptions carved by a mining expedition show that queen Neith-Hotep stepped up as ruler about 5,000 years ago, millennia before Hatshepsut or Cleopatra VII ruled the country.

While Egyptologists knew that Neith-Hotep existed, they believed she was married to a pharaoh named Narmer. "The inscriptions demonstrate that she [Neith-Hotep] was not the wife of Narmer, but a regent queen at the beginning of the reign of Djer," Tallet said.

An inscription found at Wadi Ameyra shows that Memphis, an ancient capital of Egypt that was also called "the White Walls," is older than originally believed.

Ancient Greek and Roman writers claimed that Memphis was constructed by a mythical king named Menes, whom Egyptologists often consider to be a real-life pharaoh named Narmer, Tallet explained.

The new inscription shows that Memphis actually existed before Narmer was even born.

"We have in Wadi Ameyra an inscription giving for the first time the name of this city, the White Walls,and it is associated to the name of Iry-Hor, a king who ruled Egypt two generations before Narmer," Tallet said. The inscription shows that the ancient capital was around during the time of Iry-Hor and could have been built before even he was pharaoh.

Among the drawings discovered at Wadi Ameyra are several that show boats. On three of these boats, the archaeologists found a "royal serekh," a pharaonic symbol that looks a bit like the facade of a palace. The serekh looks "as if it were a cabin" on the boats, Tallet said.

In later times, boats were buried beside Egypt's pyramids, including the Giza pyramids. The design of the boats depicted at Wadi Ameyra "are really archaic, much older" than those found beside the pyramids, Tallet said.