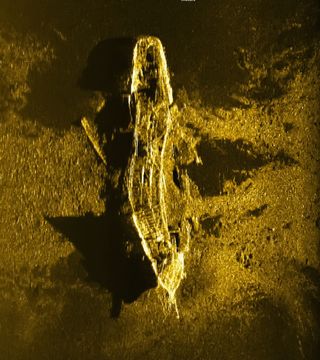 The search for the missing flight MH370 plane in the Indian ocean has turned up a 19th century shipwreck. Here, sonar images of the ship, which was likely made in the early 1800s, and is likely made of steel or iron.
(Image: © Australian Transport Safety Bureau)

The search for the mission Malaysia Airlines plane that disappeared over the Indian Ocean in 2014 has discovered something else: a 19th-century shipwreck.

Searchers discovered the shipwreck while combing the Indian Ocean for remnants of Flight MH 370, which vanished without a trace on March 8, 2014. Underwater sonar images revealed an "anomalous," likely man-made shape beneath the waves, according to a statement by the Australian Transport Safety Bureau.

On Jan. 2, the search team sent an autonomous underwater vehicle (AUV), dubbed the Havila Harmony, to follow up on the anomalous find. The AUV captured high-resolution sonar images of the object, confirming that it was a wreck. Experts at the Shipwreck Galleries of the Western Australian Museum reviewed the images and confirmed that the object was an early 1800s-era ship, likely made of steel or iron. In May 2015, the MH370 search team discovered a separate shipwreck, dating to the mid- to late-1800s, in the Indian Ocean. [In Photos: Lost in the Bermuda Triangle]

Flight MH370 vanished while traveling from Kuala Lumpur, Malaysia, to Beijing, China. Prior to the plane's disappearance, all communication from the cockpit had been normal. Military radar tracked the plane deviating from its set course until it disappeared from view over the Andaman Sea. However, based on the in-flight satellite system, investigators determined that the plane continued to fly for several more hours, leaving them to conclude it crashed somewhere over the southern Indian Ocean.

Since then, Australia, on the behest of the Malaysian government, has headed the search and recovery operations. In July 2015, a "flaperon," a flap found on the wings of an aircraft that increases drag and helps the plane turn right and left, washed ashore on the island of Reunion. Investigators later confirmed that the flap came from Flight MH370, Live Science reported.

So far, the search team has combed 30,888 square miles (80,000 square kilometers) of the Indian Ocean. However, the search operation has not yet yielded any other plane parts, such as the black box, which could reveal what caused the plane to veer off course. By midyear, the team will complete its search of 46,000 square miles (120,000 square km) of the ocean, according to the statement.