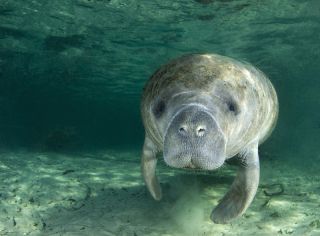 A manatee swims in the springs of Crystal River, Florida.
(Image: © A Cotton Photo / Shutterstock.com)

Despite their languid nature and bulky bodies, manatees are surprisingly graceful in their watery habitat. But do the mating behaviors of these so-called sea cows rival the elegance of synchronized swimmers, or are the mammals even more cowlike than meets the eye?

Manatees are generally solitary animals. Females (cows) are often accompanied by their individual calves, and adult manatees frequent the same seagrass beds to feed. But by and large the animals only come together to mate, said Iskande Larkin, a manatee researcher at the University of Florida.

Manatees are reproductively active throughout most of the year, though their sexual activity winds down in the winter when they're physiologically stressed, Larkin told Live Science.

It's unclear how, exactly, males find females that are in estrus. The animals do occasionally give off squeaks or squeals, but these noises are reactions to the environment rather than mating calls.

Finding mates may instead be driven by chemosensory (scent) cues, Larkin said

Whatever the case, females in estrous don't only lure a single male to them — they catch the attention of entire groups. The animals will form a so-called mating herd, in which up to a dozen males will follow and huddle around a single female to mate with her.

"Males don't have tusks or claws or anything like that, but there's lots of pushing and shoving to get to the female," Larkin said.

Males closest to the female in the writhing herd are the most dominant and aggressive of the bunch, and have the best chance to mate with her. But the males on the outside of the group aren't just hanging around doing nothing.

"They try to mate with each other," Larkin said. "They're pulling 'it' out all of the time."

It's unknown how or even if the female actively chooses which male to mate with in the herd — the mating group swims around a lot and kicks up sediment, making it difficult for researchers to identify different manatees.

To mate, a male will swim beneath the female and align his body with hers, head-to-head and tail-to-tail. He'll then grasp her flippers and insert his penis into her vagina. Mating typically lasts for a few minutes, Larkin said. [The Weirdest Animal Penises]

The mating herds will last for about two to four weeks and can get quite intense, with females sometimes trying to strand themselves to get away from their suitors.

Once the herd disbands, the males will go on with their lives and look for other females.

"And the female probably takes a big sigh of relief and sleeps a lot," Larkin said.