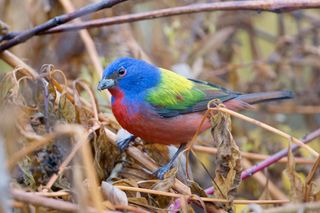 The painted bunting (Passerina ciris), a member of the cardinal family, has never (in recent memory) been spotted in the treasured 526-acre (2.1 square kilometers) park.

"This is the first recorded sighting of a male painted bunting in Brooklyn in recent memory," stated the Prospect Park Alliance.

Park visitors have glimpsed the female painted bunting (the less colorful of the two sexes) as recently as 2011. The male bunting has a bright blue head, yellow-to-green shoulders and scarlet-orange belly. [Images: Beautiful Hummingbirds of the World]

The male star of the park this week was likely en route to its winter home — the birds migrate to Florida or Central America in the winter, according to the Prospect Park Alliance. But that trek typically happens in September, so why this male was in New York in December has presented quite a puzzle for avian enthusiasts, according to a New York Times article. According to an author of bird books, Tom Stephenson, quoted in the Times article, the unseasonably warm November likely wasn't the culprit, though a wind blowing from the west may have nudged the bird there.

Stephenson described the painted bunting as "Liberace-like," according to WNYC.org.

Regardless of the reason for its stopover, the painted bunting has been a delightful spectacle for bird-watchers like Tomasz Kapala, a photo enthusiast. To miss the crowds, he went to the park during the week.

"Prospect Park is one of my favorite places to go, so when I read that the painted bunting was spotted there I promised to myself I will have a photo of him," Kapala told Live Science, adding, "I was so lucky I found him; he made my day."

The birds are about 5 inches (12 to 13 centimeters) long, with the male being the bigger and more colorful of the two sexes. The species is labeled as near-threatened by the International Union for the Conservation of Nature and is protected by the U.S. Migratory Bird Act.