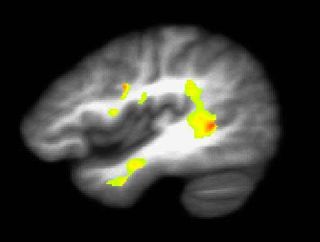 Yellow areas in the brain of a heavy marijuana user show brain regions with the most significant abnormalities. These areas correspond with those under development during normal adolescent years.
(Image: © Ashtari et al., Children's Hospital of Philadelphia)

The term pot-head takes on new meaning with a study that suggests adolescents and young adults who smoked a lot of marijuana are more likely than non-users to have disrupted brain development.

The findings are of particular concern because adolescence is a crucial period for brain development and maturation, the researchers note.

"Studies of normal brain development reveal critical areas of the brain that develop during late adolescence, and our study shows that heavy cannabis use is associated with damage in those brain regions," said study leader Manzar Ashtari of the Children's Hospital of Philadelphia.

The findings are considered preliminary, however, and more research is needed to confirm the work. The results, announced today, were detailed in the Journal of Psychiatric Research last month.

This is not the first research to suggest marijuana damages the brain. In previous reseach involving memory skill stests, subjects who'd smoked too much did poorly. But brain imaging can reveal specifics.

In an admittedly small study, Ashtari and colleagues performed imaging studies on 14 young men (average age 19) from a residential drug treatment center in New York State, as well as 14 healthy men of the same age.

The 14 subjects from the drug treatment center all had a history of heavy cannabis use during adolescence. On average, they had smoked marijuana from age 13 till age 18 or 19, and reported smoking nearly 6 marijuana joints daily in the final year before they stopped using the drug.

"The abnormal patterns of water diffusion that we found among the young men with histories of marijuana use suggest damage or an arrest in development of the myelin sheath that surrounds brain cells," Ashtari said.

Myelin provides a coating around brain cells similar to insulation covering an electrical wire. If myelin does not function properly, signaling within the brain may be slower. Myelin gives its color to the white matter of the brain, and covers the nerve fibers that connect different brain regions.

"Our results suggest that early-onset substance use may alter the development of white matter circuits, especially those connections among the frontal, parietal and temporal regions of the brain," Ashtari said. "Abnormal white matter development could slow information transfer in the brain and affect cognitive functions."

Ashtari pointed out shortcomings in the study, however.

"Further research should be done to investigate the relation between repeated marijuana use and white matter development," Ashtari said. "However, our work reinforces the idea that the adolescent brain may be especially vulnerable to risky behaviors such as substance abuse, because of crucial neural development that occurs during those years."

The work was funded by the National Institute of Mental Health.