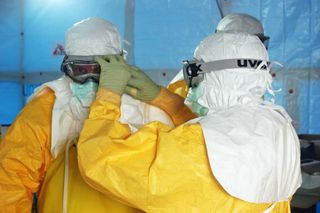 The death of a 15-year-old boy from Ebola in Liberia — a country that has been declared free of the disease twice — raises the question of why cases are still popping up in the country, experts say.

The teenager, who died Tuesday (Nov. 24), tested positive for the disease last week. His brother and father are also infected, and more than 150 people with whom the boy may have come into contact are now being monitored, according to Reuters.

"This is concerning and somewhat surprising," said Dr. Amesh Adalja, an infectious-disease specialist and a senior associate at the University of Pittsburgh Medical Center's Center for Health Security.  [The 9 Deadliest Viruses on Earth]

Although infectious disease experts expect to see new cases crop up shortly after a country is declared Ebola-free — often because of cases that weren't accounted for — in this case, Liberia had gone several months without any new Ebola cases, Adalja said.

"It does raise a lot of questions," he told Live Science.

In order for a country to be declared Ebola-free, health officials typically wait 42 days since the last person was cured of the disease.

The handling of this most recent case may have put many others at risk, Adalja said.

For example, the teenager had to visit several clinics before he was properly diagnosed, and "it's disappointing that [happened] after such a large outbreak," Adalja said. One of the biggest lessons from this new case is that countries that are Ebola-free still need to be vigilant, he said.

"I wouldn't be surprised if this chain of three becomes more," Adalja said, referring to the boy, his brother and his father. But it may be possible to vaccinate the people who came in contact with the boy, he said. There are currently vaccines against Ebola that have not proved to be effective, but are being tested in clinical trials in Sierra Leone and Guinea.

It's currently unknown how the teenager became infected with Ebola.

"We know that Ebola can persist in the semen of a survivor," Adalja said. "There's obviously the possibility of sexual transmission," he said. A recent study in the New England Journal of Medicine found that Ebola can remain in the semen of survivors for many months, and currently, the Centers for Disease Control and Prevention recommend that survivors use condoms indefinitely.

There's going to be a reservoir of the virus in the population, Adalja said.

Adalja also said that it's possible the teen may have contracted the virus from an animal — possibly a bat — in a process known as "spillover." There's always a risk for this type of transmission, he added.