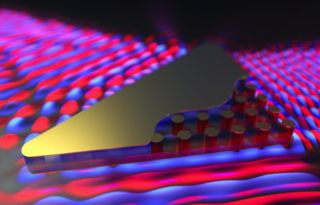 In a new study, researchers were able to bend and "squeeze" light. This light-warping technology could drive the development of light-based microchips for quantum computers.
(Image: © Peter Allen, Harvard SEAS)

For the first time, scientists have achieved infinite speeds on a microchip. Although this advance will not enable faster-than-light starships, the light-warping technology behind this innovation could lead to new light-based microchips and help enable powerful quantum computers, researchers said.

Light travels at the speed of about 670 million miles per hour (1.08 billion km/h) in a vacuum, and is theoretically the fastest possible speed at which matter or energy can travel. Exceeding this speed limit should lead to impossible results such as time travel, according to Einstein's theory of relativity.

However, in a way, researchers have overcome this barrier for decades. [Warped Physics: 10 Effects of Faster-Than-Light Travel]

To understand this feat, imagine a pulse of light as a packet of waves all blended together. The energy of this packet rises and falls across space, cresting somewhere in the middle.

If a pulse of light encounters a material that absorbs, bends or scatters light, the waves making up this packet can interfere with each other, driving its crest forward. This can make the speed at the packet's crest — known as the phase velocity of the pulse — faster than light.

All these effects do not make the energy in a group pulse travel faster than light, however, so the theory of relativity remains unbroken, the researchers said. These altered pulses also get more distorted the faster they go, so it is theoretically impossible to send useful information at faster-than-light speeds.

Still zero-index materials could have exciting applications when it comes to controlling light, the scientists said. For instance, just as electronic devices steer electrons around in circuits, photonic devices manipulate light.

The electrons in electronic components are generally limited to trickling along at only a fraction of the speed of light, because electrons encounter resistance in metal wires, which also results in wasted energy that fizzles away as heat. Photonic devices would not only operate much faster, but they would also be cooler, which means more devices could be packed together in smaller, more powerful computers.

Now, scientists have for the first time woven a zero-index material onto a microchip.

The researchers designed a new metamaterial — an artificial material whose structure is engineered to interact with and manipulate light in novel ways. The metamaterial consists of arrays of silicon pillars embedded in a soft plastic and clad in reflective gold film.

Zero-index materials can also help connect photonic microchips to other kinds of devices, such as fiber-optic networks, the researchers said.

Zero-index materials that can fit on a chip might also help advance quantum computers, which can theoretically carry out more calculations in an instant than there are atoms in the universe. Quantum computers rely on quantum entanglement, in which two or more particles behave as if they are linked, regardless of distance. By stretching wavelengths of light to infinite lengths, zero-index materials could enable even distant particles to become entangled, said study co-author Philip Munoz, a graduate student in the Department of Engineering and Applied Sciences at Harvard University.

The scientists detailed their findings online Oct. 19 in the journal Nature Photonics.