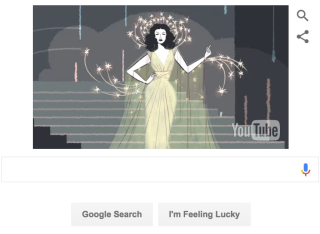 Today's Google Doodle commemorates actress and inventor Hedy Lamarr, on what would have been her 99th birthday.

During World War II, Lamarr designed a system to safeguard homing signals on torpedoes launched by Allied forces, protecting them from Nazi interception by "hopping" between radio frequencies. Her patent, co-created with composer George Antheil, never saw action during the war, but it did pave the way for technological innovations that secure wireless networks today.

Lamarr was popular at the box office, and drew international acclaim as one of cinema's great beauties, but her talents as an inventor went unsung for decades. In 1941, she and Antheil donated the patent for their "Secret Communication System" to the U.S. Navy, though it wasn't put to use until the Cuban Missile Crisis in 1962.

In 1997, Lamarr was honored by the Electronic Frontier Foundation (EFF), an international nonprofit digital-rights group. Together with Antheil, she received the Pioneer Award, which recognizes achievements that contribute to the development of computer-based communications, such as cellphones, GPS, Wi-Fi and Bluetooth. "This tool they developed to defend democracy half a century ago promises to extend democracy in the 21st century," an EFF spokesman said.