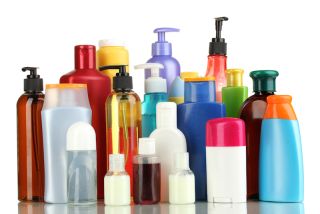 A group of chemicals commonly used in cosmetics and other personal-care products may stimulate the growth of breast cancer cells at doses much lower than previously thought, a new study finds.

The study was done on human breast cancer cells growing in lab dishes, and it's unclear whether these chemicals, called parabens, act the same in the human body. But the chemicals have been shown in previous lab and animal studies to mimic the activity of the hormone estrogen, meaning they can bind to receptors in the body to which estrogen normally binds.This is a concern because when estrogen binds to estrogen receptors, it causes cells to multiply, and in women this increases breast cancer risk, said Dr. Dale Leitman, an adjunct professor of nutritional sciences and toxicology at the University of California, Berkeley, and the senior author on the study.

Parabens are a type of chemical preservative, and are found in a wide array of consumer products, including shampoos, body lotions and sunscreens.

It's also known that parabens can activate the same pathway as estrogen, but previous studies have found that they do so very weakly, Leitman told Live Science. "Because they're weak, they're assumed to be safe compounds," especially based on the levels of parabens that have been found in humans, he said. [What Is Estrogen?]

But previous studies looked at just the parabens by themselves, Leitman said.

"The real problem when you do studies in the laboratory is that you study one compound at a time, but in the body, that's not the case. What you're seeing in the body is really a combination" of the effects of many compounds, Leitman said.

In the new study, published today (Oct. 27) in the journal Environmental Health Perspectives, the researchers focused on the effects of parabens when mixed with one additional compound: a type of growth factor called heregulin that has also been linked to breast cancer cell growth.

In other words, when the heregulin was added, the parabens were 100 times more potent at stimulating cancer cell growth compared with breast cancer cells exposed to only parabens.

With this increased potency, parabens may have an effect at a level that could be seen in humans, Leitman said.

Still, Leitman stressed that more studies are needed to determine the safety of the chemicals. Lab studies and animal studies are indirect ways of estimating the potential hazards of parabens, Leitman noted.

"All we can say from our study is that in order to determine how safe the parabens are … [we need] to test them not by themselves but with other chemicals that stimulate cell proliferation," he said.

Dr. Jiangang Chen, an assistant professor of public health at the University of Tennessee Knoxville who was not involved in the study, agreed.

"The study, like others published, only demonstrated the effects in the cells, which may not reflect the same scenario as in an intact biological system," Chen told Live Science. But additional studies have also indicated that other compounds may also contribute to how parabens affect breast cancer risk, Chen said.

Indeed, the study raises concerns that the "safe levels" of parabens used in cosmetic products should be re-evaluated, he said.

However, more research is ultimately required before a conclusion can be reached regarding the safety of parabens, Chen said.