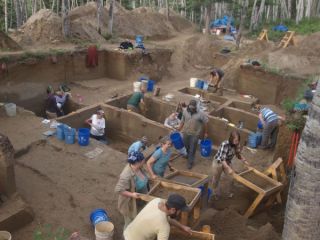 Archaeologists unearthed the remains of three little ones who died 11,600 years ago at a site called Upward Sun River in Alaska's interior. A recent study found that two of the babies came from different mothers, and both had lineages that are found commonly in modern-day Native Americans.
(Image: © Ben Potter, University of Alaska at Fairbanks)

The genetic lineage of one of the fake twin babies suggests all Native Americans can trace can trace their lineage to a single wave of migrants who crossed the Bering Strait, said study co-author Justin Tackney, a doctoral candidate in anthropology at the University of Utah.

Past studies had suggested that a separate wave of migrants might have entered the continent from other regions. [In Photos: Human Skeleton Sheds Light on First Americans]

Native Americans descend from people who first left Siberia and crossed the Bering Strait when sea levels were lower and the region formed a land bridge, sometime between 23,000 and 30,000 years ago. [In Images; Ancient Beasts of the Arctic]

But the details and timing of that process are up for debate. During the last ice age, the Laurentide Ice Sheet covered all of Canada and blocked the entrance to North America as recently as 20,000 years ago. Many geneticists and archaeologists have suggested that the ancestors of Native Americans were stuck and therefore lingered in the region between Siberia and Southern Alaska, called Beringia for millennia — a theory called the Beringia standstill hypothesis.

Though northern Alaska is now an extremely forbidding environment, at that time, "there were pockets of tundra, and maybe even forests, that large mammals and humans could actually live in, and it wasn't as harsh as it is nowadays," Tackney said. "People could eat, find food and find freshwater and survive for thousands of years."

But archaeologists and geneticists don't agree on just how long people were stuck in Beringia. And some have even argued that people came to North and South America in multiple migration waves, some of which didn't pass through Beringia.

One reason for the uncertainty is that there are no human remains that date to the probable time of the migration, and no ancient human remains from anywhere near Beringia. The earliest human remains in North America come from a child, known as the Anzick Boy, who died 12,600 years ago in what is now Montana. Other ancient remains, such as those of the Kennewick Man found in Washington, are thousands of years younger.

The recently discovered remains, which are 11,600 years old, were uncovered deep in Alaska's interior, at a site known as Upward Sun River.

"This is the oldest human remain we've found so far north," Tackney said.

The site contained the burials of three children; a cremated 3-year-old; a premature baby; and a 6-week-old infant.

The researchers analyzed the little ones' mitochondrial DNA (DNA that is passed on from mothers to their children). It turned out that the two babies, originally believed to be twins, had different mothers. (The cremated baby had no usable DNA.) One of the babies had a genetic lineage, or haplogroup, known as C1b, whereas the other had a B2 lineage, the researchers reported today (Oct. 26) in the journal Proceedings of the National Academy of Sciences.

Both lineages appear in modern Native Americans, but B2 has previously been found only in tribes that currently live farther south, such as the Navajo and the Anasazi of the American Southwest.

Because the B2 lineage is common in Native Americans but has never been found in modern-day northern Siberians or North American Indians at high latitudes, some researchers have proposed that one wave of migrants from Siberia colonized the Americas, while a second colonization wave carried the B2 lineage, said Connie Mulligan, a genetics professor at the University of Florida in Gainesville, who was not involved in the study. But the new findings nix that notion, she said.

The new result "really solidifies the argument for a single migration by showing that all major New World mitochondrial haplogroups can be found in ancient populations in the New World at the right time and in the right place," Mulligan told Live Science.

The genetic data suggests that the ancestors of modern people with the B2 lineage came across the Bering Strait, whereas their ancestral population in Siberia died out, she added.

Still, the new study can't settle the debate about how long people hung out in Beringia, Tackney said. Native Americans reached a site in southern Chile, called Monte Verde, 14,800 years ago, meaning the migration out of Beringia occurred at least 3,000 years before these ancient babies died.

Completing the timeline for the settlement of the Americas would require finding older human remains in the Beringia heartland — which is unlikely, given that most of that territory is now covered by ocean, he said.