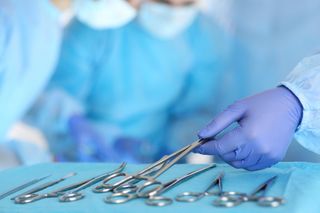 People who undergo bariatric surgery to help them lose weight may face an increased risk of self-harming behaviors in the two to three years following the surgery, a new study from Canada reports.

In the study, researchers looked at more than 8,800 people who'd had weight-loss surgery, monitoring them for three years before their surgery and three years after their operation.

"Because self-harm emergencies are a strong predictor of suicide, these findings highlight the importance of screening for self-harm behaviors in patients undergoing bariatric surgery," the researchers wrote.

Most experts agree that bariatric surgery — in which the size of a patient's stomach is reduced — benefits the general health of people who are obese. However, this isn't the first study to suggest that there might be an increased risk of self-harm after a weight-loss operation, the researchers said.

Previous studies have found evidence of increased suicide rates among weight-loss surgery patients, said Dr. Junaid Bhatti, an epidemiologist at the Sunnybrook Research Institute at the University of Toronto and the lead author of the new study, published today (Oct. 7) in the journal JAMA Surgery.

But those studies didn't follow patients from before their surgeries to after their surgeries, Bhatti told Live Science. In the new study, the researchers followed the same patients over time — as opposed to comparing a group of patients who had surgery to those who didn’t — so they were able use the patients as their own controls, which eliminated variables such as genetics and personality differences.

Bhatti stressed that although the magnitude of the increase in risk seen in the new study is large, the number of patients affected by this issue is still small — about 1 or 2 percent of the population, he said.

However, the researchers also noted that because their study only tracked the instances of self-harm that brought patients to the emergency room, the study may have underestimated the actual rates of the problem.

Previous studies have suggested several possible reasons why the risk for self-harm might go up after surgery. These include increased stress and anxiety, and changes in hormones that can result from weight-loss surgery, Bhatti said. The surgery may also change how the body breaks down alcohol after surgery, and alcohol may lower the inhibitions that would otherwise prevent people from harming themselves, the researchers speculated in their study.

Overall, bariatric surgeries are safe, but it's important for patients to be aware of the risks, Bhatti said.

Currently, many bariatric surgery programs require patients to undergo mental health evaluations before the surgery, the researchers wrote in the study.

There is often a screening process before a patient undergoes bariatric surgery, and it can be intense, Bhatti said. Health care workers evaluate a patient's mental health status and look at risk factors for self-harm such as alcohol abuse, he said.

According to the researchers, the majority of the self-harm events occurred in patients who had been diagnosed with a mental health disorder in the five years leading up to the surgery.

But the researchers also noted that the majority of incidents occurred two to three years after surgery, suggesting the importance of following up with patients during this time period.

Although doctors can try to identify at-risk patients before surgery, it can be very difficult to predict who will actually hurt themselves, Bhatti said.

Follow-up is very important, but currently, there are no guidelines in place to ensure long-term follow-up of bariatric surgery patients, said Dr. Amir Ghaferi, a surgeon at the University of Michigan who was not involved in the study. Indeed, most programs focus only on the first year after surgery, and follow-up rates are generally poor, he wrote in an editorial that accompanied the study in the journal.

It could be beneficial to offer incentives to patients to continue with their follow-up, Ghaferi told Live Science.

If you or someone you know is suicidal, the National Suicide Prevention Lifeline can be reached 24 hours a day at 800-273-TALK (8255). Some signs of suicidal behavior include talking about wanting to die, feeling trapped or hopeless and changes in sleep patterns.