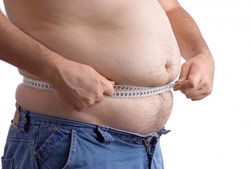 Surgery for obesity began with a simple premise: if you make the stomach smaller, people will eat less, so they will lose weight.

But in recent years the results of obesity surgery have been so outstanding, researchers went back to the drawing boards to figure out what was going on.

Their findings are beginning to present a far more complicated picture of weight — and of how much diet and exercise can really do to change it. Turns out, a slew of hormones from the gut, and their communication with the brain, play a role in the way the body maintains and loses weight.

Chasing down the answer to exactly how obesity surgery works is providing new insights into human weight loss and appetite regulation, researchers say.

"As a result of weight loss surgery, we finally are beginning to understand the physiology of weight loss better than we've ever understood it before," said Dr. Sunil Bhoyrul, a weight-loss surgeon at Olde Del Mar Surgical in La Jolla, Calif.

Their investigations may reveal how to replicate the results of the surgery without requiring patients to go under the knife.

Ghrelin from the gut

Patients can lose up to 60 to 80 percent of their excess weight in one to four years after surgery, and many have an easier time keeping it off than they did through dieting, Bhoyrul said. However, up to a third can end up back at their pre-surgical weight seven to 10 years later, he noted.

But researchers are realizing that weight loss after surgery is fundamentally different from weight loss achieved by dieting.

A key player in this difference is the hormone ghrelin, which stimulates appetite. When we diet, our ghrelin levels rise, making us hungry. We may lose weight, but our ghrelin levels stay high, and we continue to feel hungry even after eating. Ghrelin levels come down only if we regain the weight , said Dr. Robin Blackstone, a bariatric surgeon at Scottsdale Bariatric Center in Arizona.

"People who are trying to lose weight are being fought tooth and nail by the body to keep that weight on," said Dr. Miguel Burch, associate director of general surgery and minimally invasive surgery at Cedars-Sinai Medical Center in Los Angeles.

"They're losing more weight than they ever had before and not only are not hungry, they have to force themselves to eat," Burch said. This may be why surgery patients can keep their weight off, he said.

And ghrelin is likely just the tip of the iceberg in terms of hormonal changes that occur. There are likely many more hormones we don't know about that aid in weight loss after surgery, Burch said.

Results from the surgery have also highlighted the role of the brain in weight loss and weight gain. Your mind, not just your stomach, manages your waistline.

"We never realized that the brain was so important," Bhoyrul said. "We thought it was just as simple as getting people to eat less. That turns out to be the least of the issues," he said.

The brain is the body's energy thermostat, Bhoyrul said, controlling how quickly you use energy, and when to store and expend it. There is an ongoing conversation between the gut and the brain that takes place via hormones, he said.

A recent finding underscores how much there is to learn about the stomach-brain connection. Unlike the drop in ghrelin seen after gastric bypass, those who undergo gastric banding experience a drop in their hunger, but not in ghrelin, said Dr. Emma Patterson, a bariatric surgeon in Portland, Ore. This may be because ghrelin communicates with the brain differently after this surgery, Patterson said.

Surgery without the surgery

It might be possible to replicate the results of the surgery using drugs.

"If we can understand how these surgeries work…we can put whatever that thing is in a pill," Patterson said.

One possible target may be an enzyme involved in the production of ghrelin, Burch said.

Indeed, one approach taken by researchers seeking to develop an obesity vaccine has been to block the hormone's production.

However, some have argued that, because many hormones are involved in weight loss, targeting one is unlikely to help people lose weight.

"Most of us are skeptical that 'turning off the ghrelin switch' is the universal answer to all obesity," Bhoyrul said.

Pass it on: The success of obesity surgery is yielding a better understanding of how gut hormones and the brain regulate weight and controls appetite.