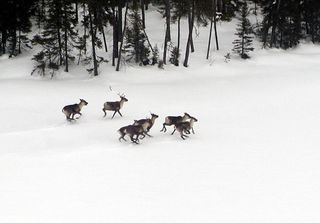 Caribou, aka reindeer in North America, could soon become endangered by threats such as oil exploration and climate change, according to a new book.

The animals are revered by many cultures and are also central to the health and vitality of the Far North, the authors of "Caribou and the North: A Shared Future" (Dundurn Press Toronto) state. Wild reindeer are widespread in Alaska, Canada, Siberia and Greenland. The book highlights the caribou in terms of its natural history; ecological importance in boreal, mountain, and Arctic ecosystems; and steps that conservationists, wildlife managers, and governments can take in protecting the future of this unique deer species. "The caribou is central to the normal function of northern ecosystems," said Justina Ray, executive director of Wildlife Conservation Society-Canada and a co-author of the book. "With their huge range requirements and need for intact landscapes, these animals are serving as the litmus test for whether we will succeed in taking care of their needs in an area that is under intensifying pressure." Caribou are the only deer species where males and females both possess antlers. And they are superbly adapted to a cold weather existence (they even have hair on the bottoms of their feet), Ray said.             They are the most abundant large land-dwelling animal of the Far North and have learned to exploit a number of ecosystems: tundra, boreal forests, mountains and polar deserts. Some populations, such as the famous Porcupine Herd of the Yukon and eastern Alaska embark on epic migrations, whereas the Narrow Lake population of British Columbia’s boreal forest remains in the same habitat year-round.             Caribou are vulnerable to a number of threats, including deforestation, natural resource extraction and accompanying road networks, and climate change. In North America, caribou have lost about one-third of their southern range.  They have been officially classified as "threatened" or "endangered" by some jurisdictions in Canada, and the U.S. caribou have disappeared entirely from eastern and Great Lakes States. Most herds in Alberta and southern British Columbia are in decline. Even the large migratory herds in the Far North are experiencing widespread declines in numbers and reproduction.   The Wildlife Conservation Society has been conducting caribou surveys in northern Ontario for the past several years, collecting baseline information on the animal’s distribution patterns relative to other large mammal species and for land-use planning decisions. "Many children who grow up in North America and Europe are familiar with caribou as symbols of holiday myths and legends," Ray said. "It's important to remember that reindeer play an important role in the rich ecosystems of the Northern Hemisphere that we all rely on. Protecting calving areas and other habitats needed to satisfy their enormous needs can help us conserve the caribou for the benefit of both the natural world and human culture."