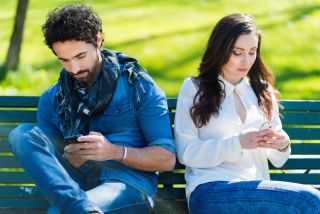 Are you a phubber? That is, do you snub others by constantly looking at your cellphone?

If you're guilty of phubbing, you may want to change your ways soon: A recent survey suggests that interrupting real-life encounters to stare at your phone can damage personal relationships.

"In everyday interactions with significant others, people often assume that momentary distractions by their cellphones are not a big deal," said Meredith David, assistant professor of marketing at Baylor University in Texas and one of the researchers who conducted the survey. "However, our findings suggest that the more often a couple's time spent together is interrupted by one individual attending to his [or] her cellphone, the less likely it is that the other individual is satisfied in the overall relationship."

In the new survey, the researchers looked at a particular kind of "phone snubbing" known as pphubbing (yes, with two P's), which occurs when one partner snubs his or her significant other for his or her phone. Pphubbing leads to lower reported levels of relationship satisfaction, the survey found. In other words, those who are pphubbed don't feel the love.

The survey was split into two questionnaires, the first of which was completed by more than 300 people. This first series of questions helped researchers identify which cellphone-related behaviors are perceived as "phubbing" in the context of romantic relationships. [8 Myths That Could Kill Your Relationship]

Then, using the behaviors identified as pphub-worthy in the first part of the survey, the researchers asked a separate group of 145 participants, all of whom had romantic partners, to rate their level of satisfaction with their relationships. The researchers also asked participants whether their partners' cellphone use caused conflict in the relationship.

Nearly half of those who took the second part of the survey reported being "phubbed" at some point by their partner, and nearly a quarter of participants said that this pphubbing resulted in some kind of conflict with their better half. Of course, not everyone who took the survey reacted to being pphubbed the same way. As part of the second survey, the researchers asked questions that helped them determine a participant's "relationship style." They found that people who had a more anxious approach to being in a relationship (i.e., felt less secure about their relationship) reported higher levels of cellphone-related conflict than people who were more relaxed, and therefore more secure, about their relationships.

So how do you ensure that you are not pphubbed (or doing any pphubbing yourself)? It's simple, really. Just be more mindful of how much time you're spending on your phone, David said. People should "be cognizant of the interruptions caused by their cellphones," she said, "as these may well be harmful to their relationship."

The findings from the survey were published Aug. 15 in the journal Computers in Human Behavior.