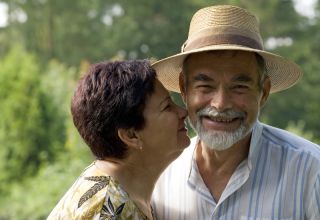 Men with long-term partners are more likely to be satisfied with their relationships if they're getting lots of hugs, cuddles and other signs of physical affection, a new study finds.

Those findings were opposite of what the researchers expected, said study author Julia Heiman, a psychologist and the director of The Kinsey Institute for Research in Sex, Gender and Reproduction at Indiana University.

"The really useful message is, don't make presumptions about the genders," Heiman told LiveScience. "Because there's no way to be sure you're going to be right in any way."

The new study looked at 1,009 couples from the U.S., Brazil, Germany, Japan and Spain, all of whom had been in committed relationships for between one and 51 years. Half of the sample had been coupled for at least 25 years.

Studying long-term couples is unusual, Heiman said, because most researchers focus on divorce and break-ups. But long-term relationships are hardly uncommon, she said.

Recruiting people via phone and door-to-door solicitations, the researchers gathered heterosexual volunteers to fill out a psychological questionnaire on their relationship satisfaction, sexual satisfaction and factors such as length of relationship, health and physical intimacy.

For men, longer relationships translated to greater happiness. Women, however, got less happy between years one and 15 of a relationship. Years 20 to 50, however, saw an upward trend in happiness in women.

Part of the reason for that odd pattern could be the pressures on women early in relationships, Heiman said.

"The period of less satisfaction seems to overlap with the period of raising children, during which other things really take a focus," she said.

Women's sexual satisfaction also increased with time, though that could be because sexually unsatisfied women don't stay in their relationships, leaving only the satisfied behind to answer questionnaires, Heiman said.

Similar relationship attrition could explain why, contrary to stereotype, men who get lots of kisses and cuddles are more sexually satisfied in their relationships.

"It may be that the men who endure in long-term relationships are the ones that kissing and cuddling is really important to them," Heiman said. "Or maybe they've changed along the way, we don't know."

Heiman and her colleagues plan to continue the research looking at how men's and women's sexual functioning influences long-term relationship satisfaction. They also plan to look at the individuals in the study as couples to see how the men and women influence each other.

"Sometimes one person thinks the other person is happy or unhappy and it's actually not true," Heiman said. "To have the reports of both of them is at least a step in the right direction."