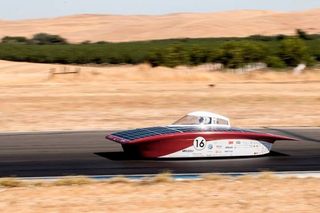 In the World Solar Challenge, teams from around the world will compete in a race about 1,900 miles (nearly 3,000 km) across the Australian Outback in specially designed solar-powered cars.
(Image: © Hayden Hall)

This fall, about 50 teams from around the world will take part in a competition in Australia to prove that their specially designed solar-powered cars have what it takes to survive the Outback.

The competition, called the World Solar Challenge, will be held from Oct. 18 to Oct. 25, and will involve racing about 1,900 miles (nearly 3,000 kilometers) from Darwin to Adelaide. Although speediness is important, teams will also have to craft effective energy management strategies.

One of the competition's rules is that the solar cars will be allowed to store only 5 kilowatt-hours (kWh) of energy at a time. For comparison, 1 kWh on an average electricity bill would cost about 12 cents and is enough to power one light bulb for approximately 8 hours. The rest of the energy must be reaped from the sun or be harnessed from the kinetic energy of the car (i.e., energy produced by the motion of the car). As such, teams will depend on the sun to charge the cars' batteries during daylight hours in the unforgiving Australian desert. [Images: Cross-Country Flight in a Solar-Powered Plane]

"The climate is no easy task," said Alex Lubkin, a materials science student at Stanford University in California, who is part of the Stanford Solar Car Project, one of the teams that will compete in the upcoming World Solar Challenge.

The Stanford team’s car looks nothing like a regular road vehicle. The driver sits very low to the ground, on the right side, and is contained inside a futuristic-looking transparent bubble that acts like the windshield. The driver gets in and out not by a door, but by a hatch that opens like the lid of the box, and there's not much room to maneuver once inside.

The hood of the Stanford team's car is long, flat and covered in solar panels. The vehicle's wheels are hidden behind two plastic sides, giving the whole car a sort of oblong shape.

"We build our cars to focus on reliability," Lubkin told Live Science. "Our motto is, 'Test it again,' so we do an enormous amount of test driving and preparing for the race to hopefully sort out any problems that could arise."

With temperatures easily topping 100 degrees Fahrenheit (40 degrees Celsius) in the Outback, it is important for team members to stay hydrated throughout the race. But it's also critical that the cars be built to withstand the immense heat.

Toby McBride, who is part of the Durham University Electric Motorsport team in the United Kingdom, said the car that he and his colleagues entered in 2011 ended up cracking under the pressure when the solar panels fractured in the stifling heat. This hadn't happened when the engineers tested the car in the mild English weather, he said.

Dom Browne, a member of the Cambridge University Eco Racing team in the U.K., added that "the race has the opportunity to throw up challenges that you could never have envisioned," whether it's enduring sandstorms that leave you stranded by the side of the road, navigating around bushfires or running out of food and water. [The 7 Harshest Environments on Earth]

The drivers also have to be wary of obstacles on the road. Lubkin recalled that in 2013, a huge modular house was spotted blocking both lanes.

To ensure the safety of all the participants (and avoid collisions with the region's nocturnal kangaroos, which tend to hop all over the roads), racing will stop each day when the clock hits 5 p.m. local time.

"You don't want to be driving at night with something that could pop out and hit you, especially when it's similar in weight to your vehicle," Lubkin said.

The teams will have to make the most of every sunbeam and every millisecond, as they must contend with a finite amount of stored power. Lubkin emphasized the importance of monitoring weather reports and adjusting strategies as the race progresses. If it's a cloudy day, for example, teams can conserve energy by driving a bit slower through the sunny patches and sprinting through the shade.

McBride's team at Durham has the expertise of a Ph.D. student specializing in Formula 1 aerodynamics who designed the solar car to be as "slippery as possible." The vehicle is also superlight, with an exterior shell made of carbon fiber.

"It's basically an airplane's wing in shape, so it creates as little drag as possible," he said.

Browne, of the Cambridge team, thinks the event highlights the types of environmentally friendly technology that will be even more important in the future. "Sooner or later, we won't be able to rely on finite fossil fuel reserves," he said. "We are striving to innovate and show what can be achieved using solar power."

Granted, the cars competing in the World Solar Challenge are not intended for commercial use. The vehicles function more like platforms to test pioneering technologies in an interesting way. The race also provides an opportunity for people to see what solar power can achieve.

For instance, the team from Durham University has developed a solar car that runs on the same amount of electricity as a kettle.

"I just made a cup of tea, and that power we're using to drive a car 3,000 kilometers," McBride said. "It's quite weird to think about it like that. It is really incredible."