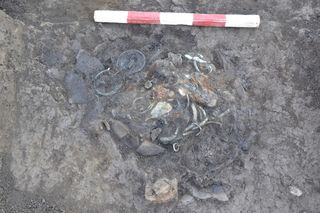 Two hoards (one of which is shown here), dating back to the eighth century B.C., may have been offerings to deities, scientists say.
(Image: © © Corina Borș)

Two large stashes of bronze weapons and jewelry, from the eighth century B.C., have been discovered in southern Transylvania, in Romania.

The hoards date back to a time before minted currency had been invented or writing had spread to this part of Europe.

Within the collections, which held 300 and 50 objects, respectively, the researchers discovered double axes, short swords and spears. They also found brooches, foot and arm bracelets, pendants, torques (a kind of neck ring), beads, and hairpins. (All the jewelry was made of bronze.) The researchers found parts of horse harnesses, as well. [See Photos of the Bronze Hoards from Transylvania]

"The majority of the objects are made of bronze, yet there are also weapons and tools made of iron," wrote Corina Bors, a senior archaeologist with the National History Museum of Romania, in the summary of a presentation she gave recently at the European Association of Archaeologists annual meeting in Glasgow, Scotland.

The hoards were discovered in a small ravine, dotted with springs, on the southern edge of a prehistoric site now called Tartaria–Podu Tartariei vest, which spreads over an area of 25 acres (10 hectares). This site was first discovered in the spring of 2012 during archaeological investigations carried out before the construction of a motorway in the area.

Many other finds were made at the site, including offering pits containing broken pottery and a burial site containing several bodies.

Gift for the gods?

The archaeologists said they aren't sure who deposited the hoards or for what purpose. In different parts of Europe, bronze hoards have been found in caves, springs, marshes and rivers, Bors said. "Such bronze hoards might be seen as votive depositions, or, in other words, gifts to the deities of that time," Bors told Live Science.

A wealthy and powerful person, or persons, likely left the hoards that were discovered at Tartaria–Podu Tartariei vest. "It's plausible to believe that this offering was made by somebody with high social status," Bors said, adding that the person may have been "a warrior chieftain."

It's important that archaeologists, not amateurs, discovered the hidden stashes, as this allows for scientific excavations and conservation, Bors said. Archaeologists in Romania have never had an opportunity to scientifically excavate and examine a hoard of this age in the place where it was deposited in ancient times, Bors said.

An elemental analysis using X-ray fluorescence of the metalwork is currently being carried out to determine where some of the items came from. The results could shed light on prehistoric trade routes, Bors said.

Excavation work at Tărtăria–Podu Tărtăriei vest will resume in the summer of 2016.