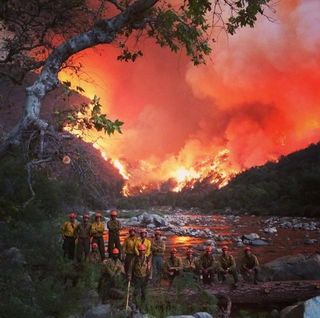 Firefighters prepare as the Rough Fire blazes behind them. As of September 2015, the Rough Fire has burned 143,000 acres, and though it is largely contained, it will likely continue smoldering until the first snowfall in the Sierra Nevada Mountains
(Image: © National Wildlife Coordinating Group)

California is facing one of its worst fire seasons on record, with nearly three-dozen wildfires blazing across the Golden State, according to the National Wildfire Coordinating Group. Drought has worsened the frequency and intensity of these conflagrations by turning millions of acres of overgrown forests into tinder that ignites with even the smallest spark.

But the drought has also dried up water sources needed to help douse the flames, said Carroll Wills, the communications director for the California Professional Firefighters Association. [It's Raining Spiders! The Weirdest Effects of the Drought]

"It's not the future. It's happening now," Wills told Live Science.

But though the drought is forcing firefighters to travel longer distances to get water, the state won't completely run out of water to fight forest fires, said Stanton Florea, a fire information officer for the United States Forest Service (USFS) Pacific Southwest Region.

California is in the midst of its worst drought in 500 years, and all that dry timber is fueling hotter, wilder fires.

Since Jan. 1, more than 446,000 acres of national forestland have burned across the state, compared with about 381,000 acres for the same period last year, Florea said. National forest covers about 21 million acres of the state, he added.

Though California has a nearly year-round fire season, meaning wildfires can burn at any time, January, February and March typically experience the fewest fires. During those months, the U.S. Forest Service surveys snowpack and water sources. From this survey, the agency creates field maps to predict which water sources will be available later in the season, when firefighters typically battle the hottest blazes. Putting out blazes across the state typically takes millions of gallons of water, Florea said.

By winter, firefighters already knew it would be a bad year for water supplies. This year, California has the lowest snowpack levels on record. In January, Mount Shasta was almost completely bare, as was much of the high country in the Sierra Nevada mountains. Snowpack serves as water storage during the warmer seasons, when meltwater replenishes waterways and reservoirs. By the summer, smaller rivers and streams were almost completely dried up, and reservoirs were much lower than they historically were, Wills said.

Firefighters will often fly helicopters over a reservoir and dip large, attached buckets into the water. But that is proving difficult this year, especially in Northern California where the fiercest fires are raging.

"Aerial firefighters just have to go farther to find bodies of water," Wills said. "It makes the job more difficult, because water is what puts fires out."

Even larger lakes and reservoirs are at such low levels that helicopter pilots have difficulty putting the water scoopers deep enough to fill the containers with water, Wills said.

The drought has forced firefighters to change their water-hauling strategy, Florea added.

"We've had to be more creative in some circumstances," Florea told Live Science.

For instance, firefighters have been bringing more water with them than in years past. They will hike in to a forest fire with bladder bags filled with water, carry water up on pack mules or shuttle in ATVs equipped with portable electric pumps that draw from lakes or streams, Florea said.  Because helicopters have to travel longer distances to water sources, agencies are using more of them, so that the turnaround time from a water source remains the same, said Scott MacLean, battalion chief and Northern Region information officer for CAL FIRE.

The team has also been bringing more water tenders, a "kind of rolling fire hydrant" that can carry up to 30,000 gallons of water, closer to the sites, MacLean told Live Science.

The teams are never unprepared: They are able to work around the water shortage because they already know where and how much water is located within every region, MacLean said.

One tool among many

"The ferocity of the fires and the level of damage is much more closely tied to the drier conditions generally," rather than lack of access to water, Wills said.

And water isn't the only tool in firefighters' kits: They also douse vegetation with flame retardant, or use bulldozers or inmate crews to cut fire breaks, which essentially eliminate the wood that serves as fuel for advancing wildfires. Firefighters also fight fire with fire by deliberately torching small swaths of forest, again hoping to remove fuel for a raging wildfire. Because these smaller, deliberate fires (called back fires) are controlled and lower heat, they can be put out easily. Firefighters also use other barriers (such as roads) to contain a burn, by burning trees near a road and increasing the distance a fire would have to jump to keep burning.

Still, water does play a key role in protecting buildings and human structures, Will said. But in some of the season's most voracious fires, such as the Valley fire that raced through Lake County, killing at least four people and devouring hundreds of homes, extra water likely wouldn't have made much of a difference, he added.

"The problem with these fires is that they're so hot and so huge that nothing is going to stop them," Wills said. "You're not necessarily even going to put water on a 40-foot [12 meters] wall of flame."

While drought conditions are making firefighting a tougher job overall, it's unlikely that the state will simply run out of water to use, Florea said.