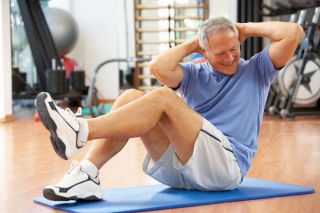 Dr. John Swartzberg is an internist and specialist in infectious disease, and chairman of the editorial board of the UC Berkeley Wellness Letter and berkeleywellness.com. He is also a clinical professor emeritus of medicine at the University of California, Berkeley School of Public Health. He contributed this article to Live Science's Expert Voices: Op-Ed & Insights.

Most of us wish we exercised more. After all, fewer than half of us get the recommended amount of physical activity, and we know it. But is it possible to get too much of a good thing?

It turns out that the answer is yes. Exercise provides many health benefits, but at some point working out too hard or too long increases the risk of injury and other adverse effects. That usually only happens with intense exercise, like training for marathons or endurance activities. Such challenging activities are perfectly fine, maybe even laudable endeavors, but if you're looking for optimal health benefits, research suggests that more moderate workouts are generally the way to go.

True, it's a problem relatively few Americans need to worry about, since inactivity is far more common and also more harmful. And not all the research on "extreme" exercise has found increased risks — but overdoing exercise can be a problem.

Here's a look at some of the latest research, a guide to help you search for the sweet spot in your personal fitness.

What do the data show?

In a British study of more than a million healthy middle-aged women in Circulation, those who were physically active at least once a week were less likely to have heart attacks, strokes or venous thromboembolic events (blood clots in the legs or lungs) over a nine-year period than inactive women. Moreover, any type of physical activity, includ­ing gardening and housework, had pretty much the same effects as strenuous activity. But what made head­lines was that the women who exercised every day didn't benefit more than the less frequent exercisers. In fact, they were at greater risk. The women who exercised at least two times a week, and no more than six times, had the lowest cardiovascular risk, compared to infrequent or daily exercisers.

Similarly, a large Danish study in the Journal of the American College of Cardiology, which compared the mortality rates of 1,098 healthy joggers and 3,950 sedentary people, found that those who did light to moderate running (in terms of pace, duration and frequency) were less likely to die over a 12-year period than non-exercisers. But strenuous joggers — fast pace, more than 2 1/2 hours a week, or more than three times a week — had a mortality rate similar to sedentary people. The researchers concluded: "…higher doses of running are not only unnecessary but may also erode some of the remarkable longevity benefits conferred by lower doses of run­ning."

Other studies have found that sedentary people are at higher risk than daily exercisers, but moderate exercisers fared better than both. For instance, a German study in the journal Heart looked at 1,038 people who had stable coronary heart disease and found that both those who were sedentary and those who exercised every day (or did more than about 15 hours of strenuous activity a week were more likely to die over a 10-year period than those who exercised several times a week — but the risk was greatest for the couch potatoes.

All of these studies were observational — not randomized, controlled studies — so they can dem­onstrate only correlation, not causation. Also in all these studies, there were differences in the way activity levels were categorized, and a relatively small percentage of people exercised at the highest levels. So the studies leave many questions unanswered.

Notably, is there something about people who overdo strenuous endurance exercise that harms their health? Perhaps they are overly competitive or compulsive and tend to overdo other things as well. In contrast, do people who exercise moderately also do other things in moderation, which is generally a healthy way to live? Researchers try to control for such factors, but the likelihood that some such factors are not identi­fied or adjusted for remains a concern.

How might excessive endurance exercise harm the body, especially when done every day? Besides increasing the risk of injuries, it may depress the immune system and increase inflammatory processes. Taking off a day or two a week gives the body time to recover from the stress of exercise.

Also, some studies of endurance ath­letes, usually marathoners, have found coronary changes that may increase the risk of arrhythmias, sudden death and other problems.

Keep in mind, however, that running and other aerobic exercise — no matter how strenuously they're done — help improve many cardiovascular risk factors, such as blood pressure, cholesterol, and body weight. Thus it's possible that "high doses" of exercise can benefit some aspects of cardiovascular health while negatively impacting others.

What's the bottom line? "Too much exercise" varies from person to person. Some of us can exercise strenu­ously for decades and not suffer any major physical or cardiovascular problems, while others are more susceptible to them, partly for genetic reasons, but also possibly because of differences in training.

There's no way to say exactly what is the upper limit of exercise for everyone. Generally, any exercise is better than none, and more exercise is usually better within reason. But you certainly don't have to keep intensifying your exercise regimen to stay healthy. For most people, moderate exercise is the sweet spot.

For more on this topic, see:

Berkeley Wellness: 5 Reasons to Get Some Exercise

The U.S. Centers for Disease Control and Prevention fact sheet on exercise: http://www.cdc.gov/physicalactivity/resources/factsheets.html