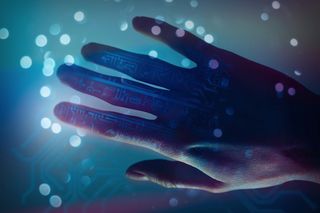 A prosthetic hand that is connected directly to the brain successfully enabled a paralyzed man to "feel" again, according to researchers at the Defense Advanced Research Projects Agency (DARPA).

The 28-year-old male, who suffered a spinal cord injury and has been paralyzed for more than a decade, was able to control a robotic hand with his brain and reported being able to sense physical sensations.

DARPA researchers attached electrodes to the man's sensory cortex — the area of the brain responsible for identifying tactile sensations, such as pressure. Electrodes were also placed on the patient's motor cortex, the part of the brain that directs body movements. [Humanoid Robots to Flying Cars: 10 Coolest DARPA Projects]

Wires were run directly from the electrodes to the mechanical hand, which was developed by the Johns Hopkins University Applied Physics Laboratory (APL) in Laurel, Maryland. Using this connection, the man could control the robotic hand's movements using the same types of thoughts, or neural connections, that the brain uses to move a hand normally. In addition, because the prosthetic hand was connected to the sensory cortex, the patient could sense when the hand was being touched, even when he was blindfolded.

The research is part of DARPA's Revolutionizing Prosthetics program, which aims to develop a prosthetic that can not only be controlled by sending signals for the brain, but can also sense precisely what those devices are touching.

"Prosthetic limbs that can be controlled by thoughts are showing great promise," DARPA program manager Justin Sanchez said in a statement, "but without feedback from signals traveling back to the brain it can be difficult to achieve the level of control needed to perform precise movements. By wiring a sense of touch from a mechanical hand directly into the brain, this shows the potential for seamless bio-technological restoration of near-natural function."

In addition to this technology, DARPA reported preliminary findings from the agency's Restoring Active Memory (RAM) program, which is a dedicated to augmenting memory formation and recall in people suffering from memory loss.

DARPA has tested the program's first few dozen volunteers, who had neurological problems unrelated to memory loss, agency officials said. These volunteers had small electrode arrays placed in brain regions known to be involved in the formation of declarative memory, or simple memory used to recall lists, as well as in regions involved in spatial memory and navigation. These electrodes are giving scientists the ability to "read" the processes involved in memory formation and retrieval, and are even offering insights into when a volunteer is about to make an error in recall.

According to their initial results, it is possible to read and interpret these key signals in memory processing and even improve memory by providing targeted electrical stimulation to the brain, DARPA officials said.

"We still have a lot to learn about how the human brain encodes declarative memory," Sanchez said, "but these early experiments are clarifying issues such as these and suggest there is great potential to help people with certain kinds of memory deficits."

"As the technology of these fully implantable devices improves, and as we learn more about how to stimulate the brain ever more precisely to achieve the most therapeutic effects, I believe we are going to gain a critical capacity to help our wounded warriors and others who today suffer from intractable neurological problems," Sanchez said.