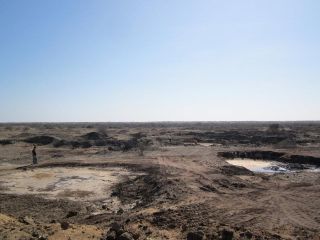 Peru's Talara tar seeps are rich in fossils from both birds and mammals. Saber-toothed cats and dire wolves once roamed here, as did ducks and songbirds.
(Image: © J. Oswald)

A dusty, windy desert in extreme northwestern Peru was once a grassland, replete with hundreds of songbirds.

But this grassland, which may have been dotted with seasonal dry forests, was also a trap. Tar seeps bubbling up from the oil-rich ground snared animals, including saber-toothed cats, dire wolves and jaguars. Now, researchers have analyzed 625 bird fossils and identified 21 species of birds, including three that are now extinct, which also succumbed to the sticky seeps. The findings, published today (Sept. 9) in the journal The Auk: Ornithological Advances, hint at a landscape that was far more diverse than the one that exists there today.

"It suggests that not all that long ago, the neotropics [the tropical zone of the Americas and temperate zone of South America] had more songbird species than even today," said study author Jessica Oswald, a postdoctoral researcher at Louisiana State University. That's impressive, Oswald told Live Science, because the neotropics are home to the greatest number of songbird species today.

Carnage in the tar

The newly analyzed bird fossils date back to the late Pleistocene epoch, about 15,000 years ago, when huge mammals like giant sloths roamed the land alongside armadillolike Glyptodons the size of Volkswagen Beetles. [10 Extinct Giants That Once Roamed North America]

The unlucky birds were caught in the Talara tar seeps, which are often covered by water or dust, luring unsuspecting animals to their doom.

"When you go out there today, you can see feathers along the outside of some of these tar pools," Oswald said. "There is a photo from a monograph published in 1979 of a goat stuck in the tar. So you go out there, and there is carnage."

Previous studies had catalogued the fossils of nonsongbirds like geese and ducks that were found at the site. The data from this research, put together with the information from the mammal remains, paints a picture of a grassy Pleistocene savannah dotted with ponds or marshes that attracted animals. The tar seeps also held the remains of a few species that might have thrived in dry forests, which are tropical and subtropical forest environments that have long dry seasons in between periods of rain.

The songbird fossils filled in this picture. Eight of the 21 species identified were blackbirds, Oswald said, which makes sense because blackbirds like marshy habitat and often hang around large mammals. Oswald and her colleague also identified three extinct species. One was a troupial, a larger relative of the orange-and-black national bird of Venezuela. Another was a species of cowbird, part of the genus Molothrus, but much bigger than the common brown-headed cowbirds still seen in backyards today, Oswald said.

The third extinct species was a blackbird, Euphagus magnirostris, which has also been found in Venezuela and at the famous La Brea tar pits in California.

"It's pretty interesting that this bird has now been found in three fossil sites from across the Americas," Oswald said.

Other species found at the site still survive today. The yellow-billed cacique (Amblycercus holosericeus), for example, is a black bird with a bright yellow beak that still lives in forests across Central and South America.

"Habitats and species ranges shift over very short amounts of geological time," Oswald said. Only two of the species found in the tar seeps still survive in the area, which has transformed from grassland to oil-rig-studded desert.

Some of the songbirds discovered in the seeps, including the yellow-billed cacique, suggest that the site also sported forests alongside the grassland, Oswald said. The cacique in particular prefers semideciduous forest, suggesting that there might have been forested land with even more moisture than is found in dry forests, she said.

Hundreds of bird fossils pulled from the Talara tar seeps await analysis, Oswald said. She said she's also going to study prehistoric songbirds in the Bahamas and is searching for new fossil hotspots in Bolivia.

"I know there are more neotropical bird fossils are out there," she said.