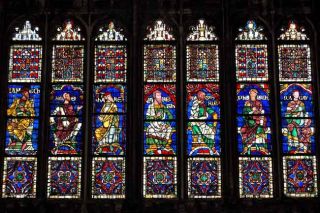 NEW YORK — A scientist is going public with his Christian belief in God and acceptance of evolution, in the wake of the Dover trial and recent, high-profile scholarly writings that have highlighted the contradictions between religiosity and science.

Karl W. Giberson, a physics professor at Eastern Nazarene College in Massachusetts, is hardly alone in holding both views (Francis Collins, who headed up federal Human Genome Project, is one widely-known example of a Christian scientist), but the nation's current cultural climate allows such a person to easily make a splash. Giberson has rejected fundamentalism, but remains a believer as well as a scientist. He has staked out a middle ground when it comes to the battle between Christians and Darwinists, stating that they can be reconciled with one another. He is sympathetic toward the motivations of creationists and scientists alike, though he is fed up with much of intelligent design as well as hard-core atheists.   The often acrimonious debate between science and religion came to a major head around the time of the Dover trial, which ended in 2005 when Judge John E. Jones III barred intelligent design (ID) from being taught in a Pennsylvania public school district's science classes. The debate simmers on today as other school districts and legislators continue to try to get ID and creationism into the classroom, while Richard Dawkins, Sam Harris and other atheists and agnostics have written recent books, blogged and spoken publicly about the logical inconsistencies and irrationality of religious, or at least Christian, beliefs. For Giberson, his contribution is his book, "Saving Darwin" (HarperOne, 2008), which he discussed here Monday night at the Harvard Club with Michael Shermer, an agnostic and the founding publisher of Skeptic magazine. The event was sponsored by the John Templeton Foundation. Giberson's journey involves being raised fundamentalist and then beginning to doubt, during his training for his Ph.D. in physics, that science was as thoroughly wrong about the origins of life and Earth as creationists claim. Obviously, he thinks one can be a Christian and accept evolution, but these two sets of knowledge "don’t make as much contact with each other as people think," he said. Many fundamentalists "elevate Genesis beyond what is appropriate." Fundamentalists' spin on the creation story in Genesis "robs it of everything that is interesting," he said. Instead, readers should recall that the Bible repeats the refrain that God found what he made "good" and looks at the world as good. Shermer pushed on, asking Giberson to comment on the following definitional statement from Carl Sagan's "Cosmos:" "For we are the local embodiment of a Cosmos grown to self awareness. We have begun to contemplate our origins … Our loyalties are to the species and the planet. We speak for earth. Our obligation to survive is owed not just to ourselves but also to that Cosmos, ancient and vast, from which we sprung." "What’s wrong with that?" Shermer asked Giberson, with a smile. This kind of thinking is "hardly going to inspire ordinary people" to be passionate about spirituality, Giberson replied. "I just don’t think it would be a functional religion." Shermer followed up, asking Giberson, then why believe in God at all? "It makes the world so much more interesting," Giberson said. "The mystery of God’s existence is a more satisfying mystery than the mystery of how can all this arise out of a particle." But what is your evidence, Shermer said, for belief in God? "I was raised believing in God, so for me, the onus would be on someone to stop me from believing," Giberson said, adding that "there is a certain momentum that is already there." Shermer said, so "you’re stepping off the page of science." "Absolutely," Giberson said, but added that he thinks science will soon nail down a definition of consciousness that will make God's intentions more clear.