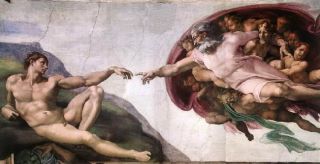 WASHINGTON — Scientists hate God. Or find God very disturbing. In fact, modern science has found no evidence of God and so it's stupid anymore to think God exists.

The above statements are often presented as conventional wisdom, but are they true?

A new collection of short essays, discussed here Thursday at an event at the American Enterprise Institute, responds to that question with a more diverse set of voices than is usually offered. Edited by "Skeptic" magazine publisher Michael Shermer and backed by the John Templeton Foundation, the booklet features replies by 13 scholars and thinkers to the question "Does science make belief in God obsolete?"

The practical answer is, "Of course not." Many people worldwide believe. In the United States, the percentage of the population without a religious affiliation is increasing but the majority still have one, according to American Religious Identification Survey 2001. The faithful aren't going away despite a golden age of scientific descriptions of the mysteries of life and the secularizing, culture-draining force of consumerism.

The answers offered by the booklet's two theologians, eight scientists, two cultural commentators and one philosopher are more creative and sophisticated than the mind-numbing "culture wars" portrayed on television. Some of the thinkers even find ways to synthesize or reconcile God and science without throwing up their hands.

The standard scientific line on God is well-represented in the booklet by several of the writers:

* Science has failed to find natural evidence of God. Natural evidence is all there is. No God. Case closed. * Slightly softer is this line of reasoning: Science erases the "need" for God as an explanation of our experiences, and God either doesn't exist or is at best a hypothesis (to the agnostic). * And then there's the view expressed in the title of University of Hawaii physicist and astronomer Victor Stenger's new book, "God: The Failed Hypothesis — How Science Shows that God Does Not Exist." Stenger also contributed to the new booklet.

These arguments are old news.

Shermer, who describes himself as spiritual and agnostic, adds a cosmic twist, casting doubt on our ability to recognize God. He claims that any encounter with extraterrestrial intelligence, should we go looking, is statistically likely to turn up civilizations that are far more medically advanced than ours and would have the ability to create life, so they will be indistinguishable from God.

"Science does not make belief in God obsolete, but it may make obsolete the reality of God, depending on how far we are able to push the science," Shermer writes in the booklet.

Yet many scientists — 40 percent according to a 1997 poll cited by Shermer — believe in God. This isn't big news to scientists, but might surprise people who rely on mainstream views of science. A handful of those folks — including Jerome Groopman, a professor of medicine at Harvard, and William D. Phillips, Nobel laureate in physics and a fellow of the Joint Quantum Institute of the University of Maryland and the National Institute of Standards and Technology — are also represented in the booklet, arguing that the natural world and the world of faith are relatively separate, yet personally reconcilable domains.

"I think that we are all comfortable with the idea there are plenty of things in our lives that we will deal with outside of the scientific paradigm," Phillips told about 70 members of the public who attended the discussion of these issues between himself, Shermer and AEI theologian Michael Novak. "And while I think faith is a particularly important part of our lives that we should deal with outside of the scientific paradigm, it is certainly not the only one."

Phillips, a Methodist, also drew from science to make his argument in favor of God's relevance, saying physicists know there are things that are "really, really improbable, but they are not really impossible according to the laws of physics … From what I know about physics, it's not impossible to imagine a world in which God acts but we never can prove it."

In the booklet, philosopher Mary Midgley, who was not at the AEI event, states that science is just one worldview that has come to prevail. Science and religion need not be at odds.

"What is now seen as a universal cold war between science and religion is, I think, really a more local clash between a particular scientistic worldview, much favored recently in the West, and most other people's worldviews at most other times," she writes.

"Scientism … by contrast, cuts [the setting of human life in] context off altogether and looks for the meaning of life in Science itself. It is this claim to a monopoly of meaning … that makes science and religion look like competitors today."

Worldviews that transcend that competition or dichotomy are offered in the booklet by Kenneth Miller, Pervez Amirali Hoodbhoy and Stuart Kauffman.

Miller, the lead witness for the plaintiffs in the Dover trial of 2005 (in which Judge John E. Jones III barred intelligent design from being taught in a Pennsylvania public school district's science classes), takes the classic Darwinian "grandeur in this view of life" approach. God is behind it all.

He rejects claims that the God hypothesis makes no sense, stating that "... to reject God because of the admitted self-contradictions and logical failings of organized religion would be like rejecting physics because of the inherent contradictions of quantum theory and general relativity."

Kauffman, director of the Institute for Biocomplexity and Informatics at the University of Calgary, takes a slightly New Age tack, saying we must "heal" the schism between science and religion by "reinventing the sacred" and evolving from a supernatural God to a "new sense of a fully natural God as our chosen symbol for the ceaseless creativity in the natural universe."

In other words, he suggests that we can get around the divide between science and God if we come up with a new concept for God that focuses on the wonders of nature , among other things.

This new concept is a global cultural imperative, Kauffman writes, if we are to overcome fundamentalist fears and reunite reason with humanity and the mysteries of life.

A middle ground that incorporates science more than the other God-friendly writers is offered by Hoodbhoy, a physicist at Quaid-e-Azam University in Pakistan.

Science hasn't necessarily made belief obsolete, "but you must find a science-friendly, science-compatible God," he writes. And that is possible, he claims, calling this entity a "scientific Creator."

Hoodbhoy thinks that God can be seen as operating within the laws of physics, tweaking outcomes in small ways that have big impacts by relying on phenomena we have observed already in the universe, such as the butterfly effect (in which the flapping of a butterfly's wings alters the atmosphere in a way that ultimately alters the path of a tornado).

In his own words, here are some things She (yes, Hoodbhoy uses the female pronoun) could do, Hoodbhoy writes:

"Extraordinary, but legitimate, interventions in the physical world permit quantum tunneling through cosmic wormholes or certain symmetries to snap spontaneously. It would be perfectly fair for a science-savvy God to use nonlinear dynamics so that tiny fluctuations quickly build up to earthshaking results — the famous 'butterfly effect' of deterministic chaos theory."

Hoodbhoy ends by saying that God is neither dead nor about to die. There is still plenty of "space for a science-friendly God as well as for 'deeply religious non-believers' like Einstein … Unsure of why they happen to exist, humans are likely to scour the heavens forever in search of meaning."

A total of 5,000 copies of the booklet became available on May 2. Free copies can be obtained at www.templeton.org.