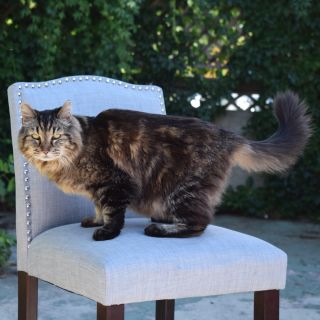 After spending decades searching for the most comfortable spot on the couch and perfecting his "come pet me" purr, one aged feline has finally earned his time in the spotlight.

Twenty-six-year-old Corduroy, a handsome male kitty from the United States, was crowned the oldest living domestic cat this week by Guinness World Records. Corduroy's title replaces another venerable cat in the record book, Tiffany Two, who died recently at the ripe old age of 27 years, 2 months and 20 days.

Corduroy's age may not seem that impressive to long-living humans, but the cat's 26 years are notable for a domestic kitty. These animals have an average life span of only 12 to 15 years, according to Franny Syufy, About.com's resident cat expert, who has been writing about cats since Corduroy was a mere kitten. [Here Kitty, Kitty: 10 Facts for Cat Lovers]

Although most pet cats die in their teenage years, it's not all that unusual for an indoor house cat to make it into its early 20s, if it's well cared for and doesn't have any serious medical conditions, Syufy said in an article for About.com.

Corduroy's owner, Ashley Reed Okura, told the Guinness World Records that she has had the cat since she was 7 years old. When Okura learned that her beloved pet was now the oldest living house cat in the world, the owner said she was "thrilled." Corduroy was likely thrilled, as well, Okura said, because she promptly bought the cat a mouse to eat in honor of his achievement.

Though the American kitty is now the oldest living cat on record, he is not the oldest domestic cat to have ever lived, according to Guinness officials; that designation belongs to Crème Puff, who lived to the awe-inspiring age of 38 years and 3 days.

Many other cats have also set Guinness World Records for their incredible characteristics. For example, the largest living cat weighs a whopping 922 lbs. (418.2 kilograms). Of course, he's no house cat: Hercules, an adult male liger (his father was a lion, his mother a tigress), lives in an animal reserve in Myrtle Beach, South Carolina. Standing a little more than 4 feet (1.2 meters) tall at the shoulder, Hercules is actually a tad shorter than his brother, Sinbad, who weighs less than Hercules and therefore missed out on the largest cat title.

And no one can overlook the awesome coat found on another incredible feline — Sophie Smith, a California kitty who holds the world record for the longest fur on a cat. Her luscious locks are an astounding 10.11 inches (25.68 centimeters) long.