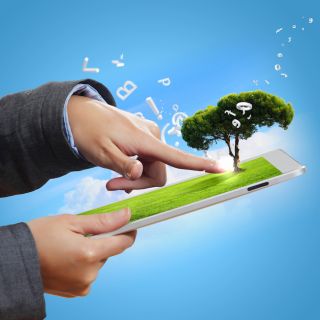 Dror Sharon is co-founder and CEO of Consumer Physics, developer of the SCiO palm-size molecular sensor. An electrical engineer, Sharon has previously served in leadership positions at two VC-backed hardware and optics startups and was an early stage technology investor. This Op-Ed is part of a series provided by the World Economic Forum Technology Pioneers, class of 2015. Sharon contributed this article to Live Science's Expert Voices: Op-Ed & Insights.

The 19th century brought the camera, changing the way people see the world. The 20th century brought radio and television, forever changing communication and breaking down geographic barriers. Near the end of that century, the Internet arrived and changed, well, everything, opening up almost the entire globe to humankind's accumulated knowledge and experience. In the past decade the Internet's impact accelerated with the proliferation of always-on, cloud-connected, and multi-sensory computers, such as smartphones and wearable devices.

It has come to a point where today, barely a few years into the 21st century, most of us will never be lost again thanks to miniaturized GPS technology. If we want to grab a meal, we can instantly figure out which restaurant is best, browsing user-generated reviews. Instant translation of more than 100 languages is instantly available. And all of this is accessible through devices that fit in our pockets, devices more powerful than the supercomputers from just three decades ago. So what's next? What will be the next tech leap to compel the world forward, to open up new and previously unattainable possibilities? I believe the answer is a wave of new, miniaturized, smart sensors.

Currently, there are a number of industries using highly advanced molecular scanners to do amazing things. Drug companies are ensuring the quality and consistency of massive amounts of pharmaceutical products, such as pills, with sensor technology. Energy companies are using sensors to ensure oil and gas meet certain purity standards. Agricultural industries are using sensors to measure the quality of plants, fruits, soils and fresh produce. [Robots 'See' Objects with High-Tech Fingertip Sensor ]

But those are all industrial applications, and the industrial sensors are large and expensive. For instance, a lab-grade molecular sensor can range anywhere from the size of a refrigerator to the size of a briefcase — and cost thousands, or even hundreds of thousands, of dollars.

To bring such sensors to consumers they must be reduced to a size and a price that anyone can use. This would make for an incredible range of consumer uses:

These are just examples of many simple micro-decisions (guesses, really) that we all do every day — specific moments that everyone has had to work around, but could arise from novel sensor technologies that are on the verge of commercialization.

With the capability to scan the molecular makeup of any object nearby, especially with a device that fits in the palm of the hand and can be taken anywhere, people will have a window into what exactly makes up their surroundings to an unprecedented level of specificity. [Will Wearable Tech Bring Humanity a 'Sixth Sense?']

The proliferation of smartphones has heralded the age of affordable micro-optics. A typical smartphone has several micro-optical elements: back-facing high-end camera with flash, front-facing low-end camera (for selfies and video calls), and an optical proximity sensor to shut off the touch screen when a user is speaking so no keys are pressed inadvertently. Some high-end phones and wearables even have a pulse-oxymeter for monitoring health (such as the sensors in the Samsung S6 , Apple Watch  and others).

With so many devices manufactured and sold every year, we are getting to a point were multiple billions of micro-optical sensors are made annually. This explosion in engineering and manufacturing capabilities is giving rise to ever more sophisticated sensors.

It's very early days for this technology, with the first advanced sensors just starting to hit the consumer market. But with a vibrant ecosystem of enthusiasts, futurists and developers springing up around this technology, this movement will succeed.