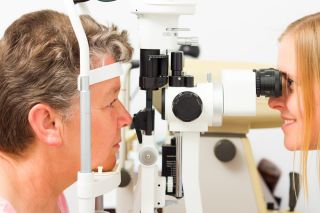 Eyedrops can shrink cataracts in dogs, which may prove a first step toward a drug that can treat or even prevent cataracts in human eyes, researchers say.

Cataracts form when the eye's lens grows cloudy, a condition that affects millions of people and accounts for more than half of all cases of blindness worldwide. Currently, the only treatment for cataracts is surgical removal of the clouded lenses. Aging populations around the world are predicted to require a doubling in the number of cataract surgeries in the next 20 years.

Cataracts often result from clumping of the proteins that make up the lens. To learn more about how eyes normally prevent such clumping and keep lenses transparent, scientists analyzed the genes of two related families that both often suffered cataracts from birth. [7 Ways the Mind and Body Change With Age]

The researchers discovered that these families carried mutations in a gene involved in manufacturing a small molecule known as lanosterol. Normal versions of lanosterol in healthy eyes help prevent the kind of protein clumping that leads to cataracts, while the abnormal version seen in both families did not.

To examine what effects lanosterol might have on cataracts, scientists experimented on dogs with naturally occurring cataracts.

"There are many old dogs with cataracts," said study co-author Kang Zhang, an ophthalmologist at the University of California, San Diego in La Jolla. "Our collaborators in China had them for another project in cataract research, and we then treated these dogs with lanosterol."

After six weeks of treatment with lanosterol eyedrops, lens cloudiness and cataract size decreased in the dogs. Similar results were seen in experiments with human lens cells and rabbit lenses on lab dishes.

"The most important implication is that we can treat cataracts with an eyedrop, not surgery," Zhang told Live Science.

Still, "this is a preliminary study, and it needs further work and more studies, as well as confirmation by other researchers," Zhang cautioned. "We will study the safety of this compound, and plan human trials for treatment of cataracts."

The scientists detailed their findings in the July 23 issue of the journal Nature.