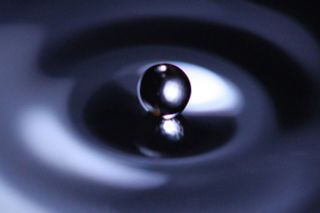 A drop of fluid striking the surface of a fluid bath produces waves that in turn propel the droplet across the bath.
(Image: © Dan Harris)

When you spill water on a glass table, the water spreads for a few seconds, and then stops in distinct puddles. These formations make water easier to spot and wipe up with a towel, but the traditional laws of physics say water should spread indefinitely. So why doesn't it?

New research links the distinct way puddles form to the way underground rocks store carbon dioxide. When cooled and compressed, this gas can seep into a rock's pores, or the spaces among rock grains, in a process similar to the way liquid spreads over a smooth surface. "Some of the key phenomenon are common to both situations," said study co-author Ruben Juanes, a professor of civil and environmental engineering at Massachusetts Institute of Technology (MIT).

The findings have implications for mitigating the effects of climate change, because injecting carbon dioxide from the atmosphere into rocks could help reduce greenhouse gas emissions and keep global temperatures cooler. [8 Ways Global Warming Is Already Changing the World]

The way water flows over a surface depends on how much the surface "likes" water. Surfaces that are hydrophilic (water-loving) will allow the fluid to spread and cover them entirely. However, hydrophobic (water-repelling) surfaces will keep fluids pent up so that they make the smallest possible contact with the surface, said Amir Pahlavan, lead author of the study and a graduate student in Juanes' research group at MIT.

The stenocara beetle from Africa's Namib Desert has both hydrophobic and hydrophilic traits that help it survive. The beetle's armor-encased body and wings rise and fall in countless tiny bumps and pockmarks. The hydrophilic bumps help condense fog into water droplets that collect in the hydrophobic pockmarks. These pockmarks then usher the droplets toward the beetle's mouth, giving the insect a sip of water.

But why are surfaces so particular about fluids? It has to do with a surface property, descriptively called "wettability," the researchers said. Wettability describes the interaction between a fluid or gas and a solid phase; for instance, a rock is considered a solid phase, and carbon dioxide mixed with rainwater (forming carbonic acid) is a liquid. A rock that is more hydrophilic can absorb more carbonic acid.

The wettability of a rock varies with the shape, size and smoothness of its grains. Rocks with smaller grains and smaller pores are preferentially saturated with water.

To droplet or not to droplet?

When a liquid flows over a porous rock (one that is filled with lots of empty spaces), the fluid displaces air on a microscopic scale. Understanding how the atoms of liquid interact with the atoms of gas is important for precisely describing the system, Pahlavan told Live Science.

Although liquid molecules "prefer" to be surrounded by their own kind, when they are surrounded by gas atoms, they begin to interact with the gas. This interaction causes surface tension.

"Imagine you have a table that is covered with a thick, liquid film," Pahlavan said. The air above the table contains gas atoms moving around; then, below that, the gas atoms meet the thick, liquid film. Below where the gas and liquid meet is the bulk of the liquid field, which interacts with the solid table [Gallery: Dreamy Images Reveal Beauty in Physics]

Squeezing the liquid film destabilizes it and forces the liquid to form individual droplets. "We were puzzled by why this happens," Pahlavansaid.

As the liquid is squeezed thinner, the bulk of the liquid layer disappears. As a result, the liquid atoms are forced to interact with the gas particles from the air above and solid particles from the table below. "This introduces an additional pressure in the system that is known as disjoining pressure," Pahlavan said. That pressure acts on a microscopic scale and is measured as the force per area of the two interacting phases (like a gas and liquid), he said.

The different pressures come into play when examining how liquids interact with rocks. "Imagine that you have a plume of oil surrounded by water in a porous medium, like an aquifer or subsurface reservoir. The traditional equation would predict that that plume will spread forever — but that is not what happens," Juanes said.

The oil is an immiscible fluid, which means it does not like to mix with other fluids. To derive an equation that describes how a liquid flows over a porous rock, the researchers want to capture the effect of immiscibility.

For example, the effectiveness of geologic carbon sequestration— which involves pumping carbon dioxide captured from coal plants into rocks deep underground — depends on how well rocks take in carbon dioxide.

This substance is almost completely immiscible with the briny water found underground. As such, understanding the microscopic forces that keep the injected carbon dioxide from spreading too thin could inform how it moves down in the subsurface rocks, the researchers said.

The study was published July 17 in the journal Physical Review Letters.