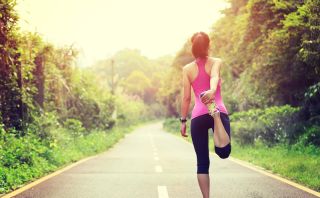 Starting up an exercise routine can be difficult, but now researchers have discovered a trick: Whether it is the end of the workday, or the ring of your alarm clock in the morning, any regular cue that you can use to signal the start of your exercise sessions can help you maintain your habit, according to a new study.

In the study, researchers found that adults who followed certain cues that prompted them to exercise without thinking much about it tended to exercise more frequently over the course of a month than those who did not follow such cues.

"If you can decide to exercise automatically, without having to convince yourself, you are more likely to stick to it," said study author Alison Phillips, an assistant professor of psychology at Iowa State University.

For example, many people exercise right after work, Phillips said. They see the end of the workday as a cue it is time to work out, and they drive to the gym instead of going home. For others, hearing the sound of the alarm clock in the morning is the cue to go for a run or a bike ride, she said. [9 Healthy Habits You Can Do in 1 Minute (Or Less)]

Previous research has suggested that it may take at least a month of repeating a certain behavior, such as exercising, in order for such cues to kick in and trigger that behavior automatically. But sticking with the same time of the day can be helpful in the process, Phillips said.

Research has also suggested that picking a type of exercise that a person finds enjoyable helps the individual form an exercise habit, Phillips told Live Science.

For the new study, researchers looked at 123 healthy adults; including 87 university students ages 18 to 33 and 36 university employees ages 21 to 73. The people in the study either already exercised regularly, or were willing to exercise for at least 20 minutes twice a week for a month.

The investigators asked the people how they decided whether to exercise; specifically, the researchers wanted to know how automatic the decision process was for the individuals. Investigators also asked the participants whether they typically did the same exercise routine, or whether their routine varied.

It turns out whether people stuck to the same routine or switched things up did not matter at all in terms of how frequently the participants exercised, the researchers found.

Rather, it was using a cue that helped. The findings suggest that "regardless of which way you go — whether you choose routine, or choose variety — it will not derail you," Phillips told Live Science.

The new study was published July 6 in the journal Health Psychology.