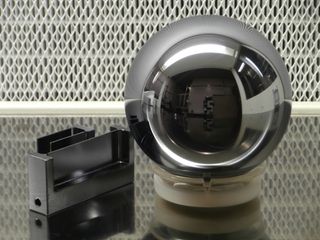 Scientists have come up with a more accurate measure of Avogadro's number, or the number of atoms or molecules in a "mole" of a substance. The new measure is arrived at by looking at a sphere of pure silicon (shown here) and analyzing the dimensions of its crystal lattice structure.
(Image: © Enrico Massa and Carlo Sasso)

A new, extremely precise measure of Avogadro's number, a fundamental constant, could ensure solid footing for a new definition of the kilogram that does not rely on a single hunk of metal sitting in France.

Every junior high school chemistry student learned Avogadro's number, or 6.022 X 10 ^23, a huge value that dwarfs the number of stars in the universe. Because Avogadro's number defines how many atoms or molecules are in a mole of matter, each mole of a substance weighs a different amount depending on the substance in question. So, a single mole of water would weigh just 0.56 ounces (16 grams), while a mole of lead would weigh about 7.3 ounces (207.2 grams).

Scientists have tried to precisely measure Avogadro's number in the past, each time using a single silicon ball that weighs 2.2 pounds (1 kg). Because silicon crystallizes into a lattice with eight atoms for each repeating unit of the lattice, they can get at Avogadro's number by measuring the volume of each cubic cell. By knowing the ratio between the volume of the crystal and the volume each silicon atom occupies, the team can then deduce how many atoms are in the tiny sphere. [The 9 Most Massive Numbers in Existence]

In a new study, researchers calculated Avogadro's number with less than 20 atoms per billion uncertainty, an improvement from the 30 atoms per billion uncertainty they calculated in 2011, the team reported this week in the Journal of Physical and Chemical Reference. By correlating the two values and then averaging the result, the team came up with an even more accurate value of Avogadro's number — 6.02214082(11)x10^23, where the (11) represents the uncertainty.

"The absence of technologies to redefine the kilogram is the biggest impediment to a redefinition of the whole system of measurement units, which is expected to deliver even more solid foundations and reliability to precision measurements and to set the stage for further innovations in technology and science," Giovanni Mana, one of the lead researchers on the new paper, said in a statement.

However, scientists can't rush into a new definition.

"Prior to redefining the kilogram, we must demonstrate that the new realization is indistinguishable from the present one, to within the accuracy of the world's best balances," Mana said. "Otherwise, when changing from the present definition to the new one, all users in science, industry, and commerce must change the mass value of all the existing artifacts."