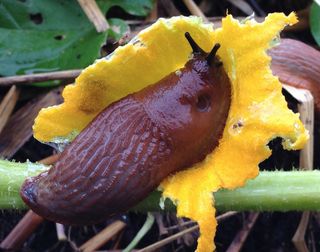 A slug of the genus Arion is common to northern Germany. It's also an express train for tiny nematodes that hitch rides in the slug's gut to get from food source to food source.
(Image: © Carola Petersen, Hinrich Schulenburg, Kiel University)

Tiny nematode worms have an unusual way of getting from point A to point B: They travel on the slug poop express.

Nematodes are worms that eat the bacteria growing on rotting vegetation. By definition, these smorgasbords are short-lived. Researchers wondered how such tiny creatures — measuring just 1 millimeter long in most cases — move long distances to the next feast.

"Our study reveals a previously unknown nematode lifestyle within the guts of slugs," Hinrich Schulenburg, a zoologist at Christian-Albrechts-Universität in Kiel, Germany, said in a statement. "The worms appear to have evolved to persist in the harsh environment of slug intestines, similar to a symbiont or even a parasite."

Nemotodes are common research animals because they are easy to raise and because they complete their entire life cycles in a matter of weeks. The millimeter-long worm Caenorhabditis elegans has the extra advantage of being transparent, so researchers can easily track the organism's cells. C. elegans has been used to study everything from how brains work to the behavior of viruses within a host. But little is known about how these simple animals behave in the wild, Schulenburg said.

To find out how these worms manage to move from food source to food source, Schulenburg and his colleagues collected more than 600 slugs, plus more than 400 other insects and invertebrates from compost piles and gardens where nemotodes and other creepy-crawlies coexist.

They dissected these invertebrates in search of nematodes and found that slugs, woodlice and centipedes all had nematodes in their guts. But it was in the slug gut where the worms really flourished: They not only survived, but also reproduced. And when the slugs pooped the worms out, they went on their merry way.

The researchers then tagged more than a million worms with fluorescent compounds and let 79 slugs snack on the light-up feast. The fluorescence allowed the scientists to trace the worms' journey through the slugs' digestive system. The researchers found that the nematodes could survive for up to a day in the slug intestines without any signs of harm.

The worms may even feed on bacteria in the slug's gut, the researchers wrote today (July 13) in the open-access journal BMC Ecology. More work is needed to find out if providing free rides for worms harms the slugs in any way.