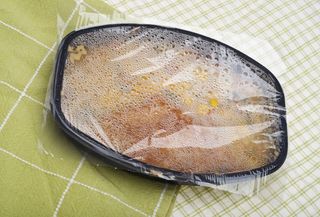 Two chemicals commonly used in products such as plastic wrap are linked to an increased risk of high blood pressure and other health problems in children and teens, according to new research.

The two chemicals — diisononyl phthalate (DINP) and diisodecyl phthalate (DIDP) — were introduced into consumer products as replacements for another similar chemical that had been shown to have detrimental effects on people's health. All of these chemicals belong to a group called phthalates, which are commonly used as plasticizers.

The two "safer" chemicals are currently used in the manufacturing of plastic wrap, soap, cosmetics and food containers, the researchers said.

"Our research adds to growing concerns that environmental chemicals might be independent contributors to insulin resistance, elevated blood pressure and other metabolic disorders," study author Dr. Leonardo Trasande, a professor at NYU Langone Medical Center, said in a statement. Insulin resistance is a condition in which people's body cells stop responding to the hormone insulin, leading to higher levels of blood sugar.

In the new study, published today (July 8) in the journal Hypertension, researchers looked at 1,329 children and teens ages 8 to 19, measuring their blood pressure and the levels of DINP and DIDP in their urine. They found that with every 10-fold increase in the levels of the two chemicals, the children's blood pressure was about 1 point higher, on average.

Although the amount of this increase is small, it is still significant at the population level, the researchers said in their study. [12 Worst Hormone-Disrupting Chemicals Revealed]

In another recent study, published in May in the Journal of Clinical Endocrinology and Metabolism, the same researchers looked at 356 adolescents ages 12 to 19, examining the relationship between the teens' levels of these two chemicals and their risk of insulin resistance, which can be a precursor to type 2 diabetes.

Exactly how the two chemicals might be linked with health problems is not clear, but previous research on other phthalates has shown that these chemicals might change the expression of genes that are important for lipid and carbohydrate metabolism, which may play a role in blood pressure regulation and insulin resistance, Trasande said.

Moreover, previous research has also linked these chemicals to increased inflammation, which may also contribute to high blood pressure and insulin resistance, he said.

The original chemical that was used before the two newer chemicals were introduced, called DEHP, was also linked to an increased risk of hypertension. DEHP was banned in Europe in 2004, but it's still allowed in the United States. Over the past decade, however, manufacturers voluntarily began to replace DEHP with DINP and DIDP, according to the study.

In the U.S., chemicals used in consumer products do not have to be tested for their health effects before they enter the marketplace, Trasande said. "The 1976 Toxic Substances Control Act does not require that chemicals have toxicity testing data prior to approval," he said.

There are steps people can take to limit their exposure to these chemicals, Trasande said. For instance, people should avoid microwaving food in plastic containers or covered with plastic wrap, he advised. He also recommended that people wash plastic food containers by hand instead of using the dishwasher, because the dishwasher may cause plasticizers in the containers to leach more into food later on.

People can also limit their exposure to the chemicals by avoiding the use of plastic containers labeled with the numbers 3, 6 or 7, he said.