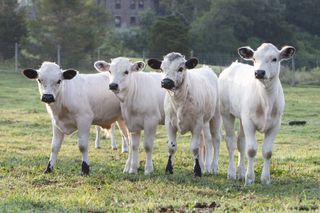 Geoffrey Koch is a Portland, Ore.-based science writer who has written for The Dallas Morning News, ScienceNOW, Portland Monthly and other publications. Follow him on Twitter @geoffreykoch. He contributed this article on behalf of the SVF Foundation to Live Science's Expert Voices: Op-Ed & Insights.

A few short miles from the fabled oceanfront mansions in Newport, Rhode Island, a quiet effort has been underway for years to save a commodity that might be more valuable than any industrialist's fortune, past or present: genetic material from vanishing livestock breeds.

Recently, deposits of this genetic material have increased to an unusual bank, the SVF Foundation, with vaults containing not cash and gold, but cryopreserved animal embryos, semen and blood. Fueling the increase is one of the first successful applications of in vitro fertilization (IVF) for rare livestock breeds anywhere in the United States, if not the world, according to Dorothy Roof, SVF's laboratory supervisor. [Heritage Livestock are Vanishing Across the United States (Photos )]

"We're trying to rescue the genetics of these animals by doing IVF," said Roof.

IVF — a procedure in which an egg and sperm are combined in a laboratory dish and the resulting embryo is transferred to a uterus — has transformed human medicine. More than 5 million human babies have been born thanks to the technique since the late 1970s, according to the International Committee for the Monitoring of Assisted Reproductive Technology (ICMART). Though it's now a mainstream fertility procedure, stories of the promise and occasional perils associated with IVF still routinely receive media coverage.

But IVF also has a long history in veterinary medicine and animal research. For example, "test tube" rabbits were produced as far back as the 1950s. More recently, IVF has been used to help threatened and endangered populations of wild animals such as cheetahs.

SVF's biorepository contains more than 5,000 frozen embryos, along with tens of thousands more samples of animal semen, blood and other genetic material. This material is meant to insure an agriculture industry that is increasingly at risk for an Irish potato famine-type collapse as it becomes more consolidated. One measure of that consolidation is that fewer than 20 champion bulls are responsible for half the genes in today's Holsteins, which themselves make up more than 90 percent of America's dairy herd, according Holstein Association USA. SVF will be able to reawaken a breed, with its full genetic diversity, within one generation.

"Because we are freezing embryos, in addition to semen, there is no ‘breed up’ program required," said Sarah Bowley, SVF’s program director. "Once we complete an embryo transfer the resulting offspring is 100 percent purebred heritage breed."

In the late 1990s, philanthropist Dorrance Hamilton founded SVF, and until now, the foundation gathered genetic material primarily by harvesting semen, embryos, cells and blood from the long and diverse list of animals loaned or donated to the foundation. Lesser-known animals currently in the SVF program include the American Milking Devon cattle (the "thoroughbred" of working cattle), San Clemente goats (known for their small stature and big ability to resist disease) and Navajo-Churro sheep (a Spanish breed adapted by the Navajos in the 1800s to the harsh, arid, desert climate of the Southwest). [Future of Fertility Treatment: 7 Ways Baby-Making Could Change ]

Prior to IVF, animals were brought to SVF and impregnated either the old fashioned way —just add the bull or ram to the field of cows or ewes and come back later — or via artificial insemination, commonly used by the livestock industry and zoos. About a week later, the embryos are gently flushed from the animals, and then frozen and added to the bank. The animals, no worse for wear, are sent home or to a new breeding program.

The process has worked well and helped to build the gene-bank balance to impressive levels. A 2008 article in the journal Reproduction in Domestic Animals listed SVF as among the world's predominant genetic repositories for rare livestock breeds, and the staff has collected at least 200 in vivo embryos per breed. The foundation announced a partnership with the Smithsonian last summer, the terms of which include plans for a new biorepository and cryopreservation laboratory at the Smithsonian Conservation Biology Institute in Front Royal, Virginia.

However, the best bet when saving genetic material for the future is to diversify. Preserving heritage breeds means trying to make sure every animal brought to SVF contributes to the bank. But perhaps for some of the same reasons that human couples occasionally have a hard time getting pregnant, about a quarter of the animals brought to SVF are poor embryo donors.

"This means that the diversity in the bank is less than it should be," said Roof.

IVF is a multistep process. Eggs are taken from an animal's ovary, fertilized with semen, and then grown in a dish in an environment that attempts to mimic what's happening in an animal's body at the earliest stages of pregnancy.

The process is complicated from step one — harvesting the eggs or oocytes — which is done by Kevin Lindell, a veterinarian and assistant professor at Tufts University.

"Picture a piece of plastic that's about 24 to 30 inches long, 2 inches wide and 1 inch deep ... Right at the end is an ultrasound probe, and next to that is a needle connected to an aspiration pump so we can create a vacuum," Lindell said, describing the tool he uses on anesthetized animals to gather oocytes. Poor technique, including too much vacuum, means damaged oocytes, which is why Lindell practiced extensively on dairy cows culled from herds in the area before attempting the procedure on SVF heritage animals, he noted.

Then there's the issue of what happens to those oocytes in the lab. Small fluctuations in the lab environment — from levels carbon dioxide or oxygen gas content to temperature to pH level — can have ruinous effects on the outcome, said Lindell.

Bowley facilitated the foundation's exploration into IVF as a complement to its other gene banking activity a few years ago. Among her responsibilities, she arranges for donor animals to be brought to SVF and oversees all collection of genetic material.

"We make a substantial investment in money, time and resources to identify donor animals, get them here and do all the pre-collection health testing," said Bowley, who works side by side with Lindell and Roof in their procedures. "It's tough after all that to find out that we're not going to be able to preserve any embryos. IVF allows us to recoup our costs and, more important, these animals' genetics."

According to a 2014 article in the journal Theriogenology, which covers topics in animal reproduction, an IVF program is successful if about 70 percent to 80 percent of the presumptive embryos divide after the first 8 to 10 hours in the dish (demonstrating successful fertilization) and if about 30 percent of those that remain make it to the blastocyst stage (a common early milestone for all mammal embryos) a few days later.

For four months, Bowley, Lindell and Roof extensively practiced the technique on both slaughterhouse cows and dairy cows culled from herds in the area until they could routinely hit those benchmarks. IVF, despite being well established in human and veterinary medicine, is anything like a simple or straightforward procedure.

"Basically all bets are off when you decide to do IVF," Roof said. "Things become very complicated."

Now, after many months of training, Bowley and her colleagues have done successful IVF procedures with a dozen donor animals — so far, Ancient White Park cattle and Red Poll cattle — producing more than 20 embryos. IVF for the foundation's small ruminants — sheep and goats — is likely coming soon, she said.

The bottom line is that thanks to IVF, the balance in SVF's gene bank is going up faster than ever, though comparisons to the world of finance and fortunes only go so far.

"It's the kind of bank where people ask us, 'How much is it worth?'" Roof said. "And the answer is, 'It's probably worthless until the day it becomes priceless.'"