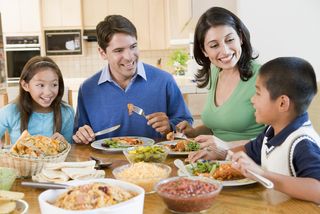 Parents and pediatricians should fight childhood obesity by improving diet and activity levels in the home, new guidelines propose.

In a new paper, leading physicians' group the American Academy of Pediatrics (AAP) is updating its guidelines, last issued more than a decade ago, about how to stem rising rates of childhood obesity. The updated recommendations encourage parents to help change kids' eating and levels of activity at home, and emphasize family-based strategies to promote healthier lifestyles.

More than one-third of American children and teens are overweight or obese, according to the Centers for Disease Control and Prevention. Although some progress has been made in fighting obesity, including recent declines in obesity rates among preschool-age children, weight problems in kids remain a serious health concern.

"Once obesity is established, it's very hard to treat," said Dr. Stephen Daniels, chairman of the AAP nutrition committee and chair of pediatrics at the University of Colorado School of Medicine in Denver.

Because it takes a lot of time and effort to treat obesity, the paper's main message for parents and pediatricians is to focus on preventing childhood obesity in the first place, Daniels said. Many of the behavioral approaches used to treat kids who have already become obese might also apply to its prevention, he noted.

"The home environment has a big influence on what kids eat and how active they are," Daniels told Live Science. [10 Ways to Promote Kids' Healthy Eating Habits]

That's why the report, published online today (June 29) in the journal Pediatrics, outlines key steps that parents can take to promote healthy eating at home and an active lifestyle for families, he said.

To prevent childhood obesity, the AAP guidelines recommend that parents do the following:

Although parents may have heard this health advice before, putting these steps into practice and holding the line with kids can be difficult, Daniels said. Parents can start by picking one behavior change they can implement effectively, praising good behavior when a child demonstrates it and then building on this initial success over time, he suggested.

Daniels stressed that parents have a lot of influence over the behaviors that can lead to childhood obesity. And the time spent by parents and pediatricians addressing and reinforcing prevention issues early on can be beneficial to families, and have a big impact on long-term health, he said.