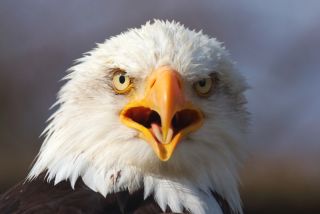 The oldest known banded bald eagle was killed by a car on a road in western New York on June 2, according to New York state officials. But the 38-year-old bird of prey surpassed the previous longevity record for this species by five years, which could be a sign that conservation efforts are helping bald eagles make a comeback, officials say.

"This record eagle is a testament to the diligent conservation and restoration work done under New York's Bald Eagle Restoration Program," Marc Gerstman, executive deputy commissioner of the New York state Department of Environmental Conservation (DEC), said in a statement.

After bald eagles nearly went extinct in the 1960s, they were listed as an endangered species in the lower 48 states under the federal Endangered Species Preservation Act of 1966. In 1972, a national ban was passed on the pesticide DDT, because the chemical inhibited eagle eggs from hatching in the nest. Taking, or killing, bald eagles was also prohibited as part of the federal Endangered Species Act of 1973, which eventually gave rise to New York state's Bald Eagle Restoration Project of 1976. [Photos: Bald Eagles of the Mighty Mississippi]

Intensive restoration programs in the late 1970s slowly rebuilt the bird's numbers, and since 1999, the population of breeding bald eagles has increased each year, according to the Department of Environmental Conservation's New York State Bald Eagle Conservation Plan.

Gerstman commended the DEC's efforts to conserve habitats and maintain clean air and water for bald eagles and other wildlife.

Eagles and other large birds are sometimes banded to help researchers track their migration patterns and assess the birds' health. The ring-shaped bands fit on the birds' legs but don't cause any harm. Banding records indicate that the record-setting eagle was a nestling, or too young to leave its nest, when it was originally brought from Lake Puposky in northern Minnesota to the Montezuma National Wildlife Refuge in Seneca Falls, New York, as part of the state's Bald Eagle Restoration Program. It was one of five young eagles brought to and raised at Montezuma.

The eagle was banded in August 1977, when it was only a few months old, DEC officials said. Four years later, once it reached its breeding age, the eagle nested in Hemlock-Canadice State Forest, about an hour's drive from the refuge.

The eagle, called 03142, was a father to many eaglets over the ensuing years. Peter Nye, a retired DEC wildlife biologist who started New York's Bald Eagle Restoration Program, said that when researchers banded 03142, they "had no idea how very special and significant this young bald eagle would become to our nascent bald eagle restoration program."

"Based on his recent recovery near this site, we have to assume he has been the resident male, breeding here for the past 34 years," Nye said in a statement. "That's quite a stretch, and likely a record in itself."

The 38-year-old eagle was found with a recently killed rabbit nearby and appeared to have been hit by a vehicle. Vehicle collisions cause more than 30 percent of known eagle deaths, according to the DEC.

"His longevity, 38 years — although ingloriously cut short by a motor vehicle — is also a national record for known life span of a wild bald eagle. All I can say is, hats off to you, 03142 — job well done!" Nye said.