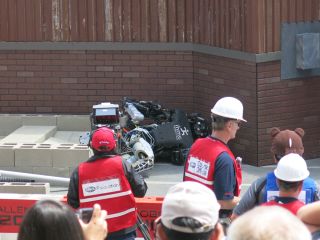 Florida Team IHMC's robot takes a spill while attempting to walk over a pile of rubble.
(Image: © DARPA)

They walked, they climbed, they drove around in utility vehicles, but the skillful robots at this year's DARPA Robotics Challenge (DRC) also spent much of the competition doing something else: falling over.

The challenge, hosted by the Defense Advanced Research Projects Agency (DARPA), was a friendly competition among engineers from around the world, all of whom were tasked with building a two-legged bot suitable for disaster-response missions. The 25 robots that made it to the final round of the competition in Pomona, California, last week (June 5-6) were tasked with driving a vehicle, walking over debris, using power tools, climbing stairs, turning a doorknob and, most importantly, not tumbling over.

But tumble they did. Much to the chagrin of the engineers controlling them (and the delight of thousands of YouTube viewers), many of the robots had a hard time staying upright. But the robot that won the competition avoided this problem. [See Photos of the Robot Competitors in Action]

That winning robot, HUBO, from South Korea, had wheels in addition to feet, so it could switch between walking on two legs and rolling over the ground. This ability helped the bot stay upright throughout the competition, even when the going got rough.

HUBO's wheel-less competitors suffered from a fact that has been plaguing engineers for years: bipedal bots may look (kind of) like humans, but they're built like machines. That is, a robot's rigid parts are no match for the agile muscles that keep adult humans on their feet, said Gill Pratt, program manager of the DRC.

"Where we are right now, robots are roughly at the same level of dexterity and mobility of a 1-year-old child. They fall down, they drop things out of their hands all the time — in general, they need to try things many times to get them right. That's about where the field is now," Pratt told reporters in a news briefing in 2013.

Pratt's statement still rings true two years later, as last weekend's stumbling robots demonstrate. But if you watch the video closely, you might notice that many of the robots seen dropping to the ground have a few things in common. Not only did the losing bots lack wheels, but they also, for the most part, had bulky torsos. It's true that these big bellies may have housed large batteries (allowing the bots to operate for longer in the field), but that design also made the bots top heavy.

In fact, the larger a robot gets, the harder it is to keep the bot balanced and walking about, said Rodney Brooks, founder and CTO of Rethink Robotics, a commercial robotics company based in Boston.

"Building a big thing that walks is harder than building a small thing that walks — things work differently on a micro scale," Brooks said. "It has to do with the strength to weight ratio. This is why an elephant's legs are much weaker, relative to its body mass, compared to an ant," Brooks said in an interview with Live Science in 2013 (during the second year of the DRC).

Another robot that did well at the DRC was Carnegie Mellon University's CHIMP. This bot can walk on two legs, but it also has rubberized track wheels (like the wheels on a tank) attached to all four of its appendages. When CHIMP met an obstacle that might topple it, the bot put down its arms and rolled through the course on four wheels.

Team RoboSimian from NASA's Jet Propulsion Laboratory took a similar approach to that of the folks at Carnegie Melon. NASA's apelike bot lacks wheels, but it used its arms to stabilize itself when it was about to topple over.