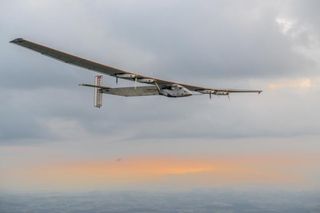 The first flight of the Solar Impulse 2 is the dawn of a new era of green technology.
(Image: © © Solar Impulse | Revillard | Rezo.ch)

The pilot of a solar-powered airplane had to abort his planned flight across the Pacific Ocean and land in Japan due to bad weather, officials said.

Swiss pilot André Borschberg took off in the ultra-lightweight aircraft, called Solar Impulse 2, from Nanjing, China, on Sunday (May 31), en route to Hawaii. The voyage across the ocean, which is part of an attempt to fly around the world in the solar-powered craft, was expected to last six days. However, Borschberg was forced to land the aircraft at Japan's Nagoya Airfield this morning (June 1) because of poor weather conditions.

"Unfortunately, the current weather window to reach Hawaii has closed. The cold front is too dangerous to cross," officials said in an update posted on the Solar Impulse website.

"On my way to Nagoya disappointed for not continuing but very thankful to the Japanese authorities for their support," Borschberg tweeted.

A new window for the trans-oceanic flight has not yet been identified, but the Solar Impulse team says it will wait out the bad weather in Japan. [Solar Impulse 2: Photos of the Historic Round-the-World Flight]

Borschberg and fellow pilot Bertrand Piccard have been taking turns piloting the Solar Impulse 2, a zero-fuel aircraft powered by the sun, on an attempted round-the-world flight. Their undertaking is intended to promote clean energy. Borschberg had been waiting for a suitable window to fly from China's Nanjing Lukou International Airport to Hawaii's Kalaeloa Airport, a distance of about 4,413 nautical miles (8,172 kilometers).

To stay alert for the lengthy flight across the ocean, Borschberg planned to take short naps of no more than 20 minutes while the plane was on autopilot, and use meditation techniques. Piccard has developed his own techniques to fly long stints, which involved self-hypnosis.

The solar-powered plane began its journey in Abu Dhabi, the capital of the United Arab Emirates, on the evening of March 9. On its way to China, the plane made stops in Oman, India and Myanmar.

After the plane gets to Hawaii, the aircraft will make several other stops in the continental United States before reaching New York. From there, it will continue on to Europe or Africa, on its way back to Abu Dhabi. Each leg of the trip will be broadcast live on theSolar Impulse 2 website.