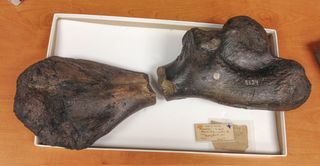 The two partial limb fossils from the ancient sea turtle Atlantocheyls mortoni fit together perfectly, leaving little room for doubt that they are from the same bone. The distal half (shown on the left) was discovered in 2012; the proximal half (at right) has been in the collections of the Academy of Natural Sciences of Drexel University for more than a century and is shown with its original labels. It was first described in 1849.
(Image: © Drexel University)

When an amateur collector brought a strange, heavy fossil to the New Jersey State Museum, paleontologists David Parris and Jason Schein never imagined the surprise it had in store.

They recognized the fossil as a humerus — the large upper arm bone — from a turtle, but one that had broken in half so only the distal, elbow-connected end remained.

Parris also thought the fossil looked familiar. He thought the resemblance to a fossil he had studied years earlier in the collections at the Academy of Natural Sciences of Drexel University was coincidental. That turtle humerus had only the shoulder end of the bone.

But conventional wisdom held that they couldn't possibly be the same bone. The older specimen, discovered in 1849 or earlier, was much too old. Its missing half should have deteriorated from exposure within decades.

The academy's older bone was also one of a kind: It was the first, and to that date only, specimen of its genus and species (Atlantochelys mortoni). [Photos: Butterflies Drink Turtle Tears ]

Until the day Schein carried the newfound fossil to the academy in Philadelphia.

"As soon as those two halves came together, like puzzle pieces, you knew it," said Ted Daeschler, the academy paleontologist who helped Schein verify the surprising find.

The two halves were parts of the same bone. One half was collected at least 162 years before the other.

In addition to overturning conventional wisdom, the fully assembled bone made it possible to calculate that this animal was one of the largest sea turtles ever known, about 10 feet from tip to tail.