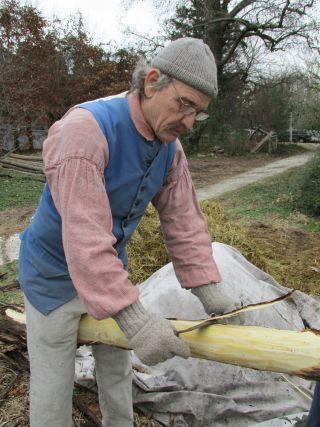 Colonial Williamsburg garden historian Wesley Greene strips the bark from a locust log with a draw knife. The log will be used as garden-bed edging in the town.
(Image: © Wesley Greene)

Wesley Greene is garden historian for the Colonial Williamsburg Foundation. This article is adapted from one that originally appeared as "Black Locust: an All American Tree" in The Interpreter. Greene contributed this article to Live Science's Expert Voices: Op-Ed & Insights.

As the strongest timber in North America, black locust helped build Jamestown and hardened the navy that decided the War of 1812, yet today few Americans have heard of it. The nation's taste in ornamental trees has changed fairly dramatically since the first street plantings were made in Williamsburg, Virginia, in the 1730s.

The catalpas that line the town's Palace Green, which was one of the first examples of a municipal street planting in British North America, are seldom planted today and are considered by most horticulturists as little more than weed trees. [Quaking Aspen: Trees of the Mountain West ]

The paper mulberry, whose twisted trunks elicit so many comments from visitors, was one of the first Asian trees brought into cultivation as an ornamental tree in North America. John Clayton first described the paper mulberry in "Flora Virginica" (1762), and by the end of the century, it was a common component of the Virginia plantation landscape. Today, it is nearly impossible to even find a paper mulberry for sale at a nursery.

The tulip poplars (Liriodendron tulipifera) that were found by the homes of many of the 18th-century Virginia gentry have been returned to the forests from which they came, seldom planted in residential landscapes, and the Lombardy poplars planted by Thomas Jefferson along Washington D.C.'s Pennsylvania Avenue (called "the Grand Avenue" at the time) have largely disappeared from the American landscape.

Of all the trees favored by our colonial predecessors, both as an ornamental and as a utilitarian tree, the black locust (Robinia pseudoacacia) is perhaps the most significant. It is first mentioned by William Strachey, a member of the 1609 resupply mission to Jamestown . In "The Historie of Travell into Virginia Britania" (1610), he describes it as "a kind of low tree which beares [sic] a cod like to the peas, but nothing so big: we take yt [sic] to be locust."

The name stuck, but it is interesting to speculate what Strachey meant by a locust. The locust tree of Europe is the carob tree (Ceratonia siliqua). Some believe this tree, rather than the insect, was the food that sustained John the Baptist in the wilderness and gave it the common name of St. John's Bread.

It is doubtful that Strachey ever saw a locust or carob tree, as this Mediterranean plant will not grow in England, but he may have seen the branches of the carob pictured in signs above the doors of goldsmiths as the large, uniform seeds of the carob provided the original carat weight. Both the black locust and carob trees are members of the large Fabaceae, or pea family, and have similar leaves, and this was probably the source of the confusion.

Botanists have suggested that the black locust is one of the few examples of a tree exported by the American Indians from the mountains to the coastal plain for domestic use, and by the time the first colonists arrived, they found them planted "by the dwellings of the savages" (Strachey, 1610).

The American Indians used the locust to form their bows. This use is recorded in "The Natural History" (c.1730), attributed to William Byrd II: "Locust tree is a very straight, tall and rather thick tree whose wood is the toughest in all the world, and almost cannot be broken; thus the savages usually make all their bows from it." Some historians question the authorship of "The Natural History" and have pointed to parallels between this work and John Lawson's "History of North Carolina" (1714). Though Lawson was familiar with the tree, his description of it was quite different: "The Locust for its enduring the Weather, is chosen for all sorts of Works that are exposed thereto…We have little or none of this wood in Pampticough," he wrote.

The extreme resistance to rotting is perhaps the black locust's best-known attribute, and it was on poles of black locust that the first buildings in Jamestown were erected. One hundred years after the founding of Jamestown, Mark Catesby, author of "Natural history of Carolina, Florida and the Bahamas Islands" visited the site of the original settlement and recorded the following: "Being obliged to run up with all the expedition possible such little houses as might serve them to dwell in, till they could find leisure to build larger and more convenient ones, they erected each of their little hovels on four only of these trees, pitched into the ground to support the four corners; many of these posts are yet standing, and not only the parts underground, but likewise those above, still perfectly sound." The black locust is the most durable American wood for ground contact, and it is what is used to line the beds at the Colonial Garden in Williamsburg.

The genus Robinia is named for Jean Robin, a Parisian apothecary appointed as the king's arborist to Henry III, a post he retained under Henry IV and Louis XIII. In 1597, Robin is given the commission to lay out the garden for the Faculty of Medicine, which later became the famous Jardin des Plantes in Paris.

Swedish scientist Carl Linnaeus credits Robin as the first European to plant the black locust in Europe,.giving the introduction date of 1601. Linnaeus also renamed the locust from Acacia Americana Robinia to its present Robinia pseudoacacia, in Robin's honor. The original tree, transplanted several times, was alive as late as 1963 in the gardens of the Museé d' Histoire Naturelle in Paris.

However, it may not have been Robin after all who first brought the black locust to Europe. He does not list it in his "Catalogus stirpium" (1601), nor is it listed by his son, Vespasien, in his "Histoire des plantes" (1620). The first French citation for the tree comes in Jacques-Philippe Cornut's "Canadensium plantarum historia" (1635), well after the date Linnaeus gave for the original planting.

The black locust is listed as "Locusta Virginiana arbor" in the catalog "Plantarum in Horto" (1634) compiled by the Tradescants — father and son gardeners, both named John, who were botanists and collectors, housing their collections at The Ark in Lambeth near London. John Parkinson recorded the black locust in "Theatrum Botanicum" (1640) and wrote that he had seen "a very great tree of exceeding height with Master Tradescant," suggesting that the tree had been planted quite a bit earlier.

Regardless of who first brought the tree to Europe, it quickly becomes a favorite ornamental tree for its delicate foliage and its large white, wisterialike blooms that produce one of the sweetest fragrances of any landscape tree.

At the time black locust was widely admired in Europe, it was equally popular in the United States. Virginian Landon Carter records on May Day, 1766, "I have hitherto my Locust trees to bloom in April, but now their leaves just begin to shade the trees with green."

The black locust is also given a prominent place at Mount Vernon by George Washington, who records in August 1776, "It will not do to Plant the Locust Trees at the North end of the House till the Framing is up."

Its popularity as a landscape tree only seems to increase in the 19th century. William Cobbett — an English publicist, author, entrepreneur and all-around cantankerous historical figure — grew black locust on his farm in New York from 1817 to 1819. When he returned to England (after libeling Dr. Benjamin Rush for killing George Washington with excessive bleeding and purging), he brought with him bags of locust seeds (as well as the corpse of Thomas Paine.

In England, Cobbett is credited with promoting the sale of more than 1 million of these trees. As late as 1946, A.L. Howard records the following in his book, "Trees in Britain": "The evidence of Cobbett's activity is very marked in the gardens around London and all other cities and towns throughout Great Britain."

In Virginia, Edwin Booth planted a memorial grove of black locust in his Carter's Grove plantation in 1881 to commemorate the Yorktown centennial. In 1892, Charles Sprague Sargent, first director of Harvard's Arnold Arboretum, wrote the following in "The Silva of North America": "No other North American tree has been so generally planted for timber and ornament in the United States and Europe; and no inhabitant of the American forest has been the subject of so voluminous a literature."

A value beyond price

The attributes of this tree are seemingly endless — for example, its durability in the ground, and the wonderful fragrance of the flowers from which bees make excellent honey. It has the highest beam strength of any North American tree, and it is used to stabilize erosion-prone slopes and to reclaim mining sites. It fixes nitrogen in its roots, is extremely resistant to pollution and, for this reason, was planted along rail lines in England. The roots have a sweet licorice flavor, and a cord of seasoned locust has the same Btu potential as a ton of anthracite coal — the highest fuel value of any American tree.

It is ironic that this thoroughly American tree goes by all European names: "locust" rather than the carob tree; Robinia, in memory of a French man; and the species name pseudoacacia, or "false acacia," in comparison to another European tree of the pea family.

The tree that won a war

And yet we could make the case that the black locust helped the United States win the War of 1812. The decisive battle of that war was fought on Lake Champlain. On Sept. 11, 1814, the American fleet, commanded by Commodore Thomas Macdonough, engaged the British fleet, commanded by Capt. George Downie (killed in action), in Plattsburg Bay.

The Americans won a decisive victory, essentially stopping the invasion forces, led by Sir George Prevost. Prevost was recalled to England to face a court martial for his actions but died before the trial was convened.

One of the reasons circulated for the British Navy's defeat was that English ships were built with oak nails (the large pins or trunnels that hold the wooden members of a ship together), while American ships were built with locust nails. As a result, when the cannonballs from the American fleet hit the British ships, those ships came apart. But when the shot from the British ships hit the American fleet, their ships held together — and that is the reason they lost the Battle of Plattsburg Bay.

The very next year, the British began importing thousands of locust nails to refit the British Navy. By 1820, the Philadelphia market alone was exporting between 50,000 and 100,000 locust nails to England per year. As locust continues in export, even to this day, some would say we have been selling weapons to the enemy ever since.