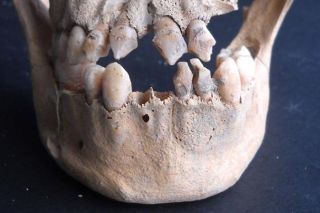 One of the skull fragments that researchers at at Stanford University and the University of Copenhagen used to help reveal more about the identities of 300 enslaved Africans from the 17th-century.
(Image: © Jay B. Haviser, published in Schroeder et al. PNAS 2015)

In the centuries of the Atlantic slave trade, the largest forced migration in history, more than 12 million enslaved Africans were shipped to the New World to work on plantations in eastern South America, the Caribbean and portions of the eastern United States.

Spanning the 16th through 19th centuries, this "Middle Passage" period often has incomplete records. Most focus on vessel and captain names and their home ports, forgetting the millions of humans below deck.

More than 300 years ago, three African-born slaves died on the Caribbean island of Saint Martin. No written records memorialized their fate, and their names and precise ethnic backgrounds remained a mystery. For centuries, their skeletons were subjected to the hot, wet weather of the tropical island, until they were unearthed in 2010.

With support from the U.S. National Science Foundation (NSF), researchers at Stanford University and the University of Copenhagen have extracted and sequenced tiny bits of DNA remaining in the skeletons' teeth. From this data, the researchers were able to determine where in Africa the individuals likely lived before they were captured and enslaved. This research marks the first time that scientists have been able to use such old, poorly preserved DNA to identify — with high specificity — the ethnic origins of long-dead individuals.

In a podcast for Science360, NSF interviewed Maria Avila, a member of the research team and a postdoctoral research fellow in genetics at Stanford University, about the study and this newly developed genetic technique.

"It never quite registered, the actual origins of these persons," said Avila. "Like not geographical origins, or ethnic origins, or anything like that. They suddenly became just a number and a lot of their identity was lost this way, and their history and who they were was lost as they were put in ships to America." [Wreck of Civil War Ship Commandeered by Slaves Rediscovered ]

The finding paves the way for a greater understanding of the patterns of the trans-Atlantic slave trade, and may transform the general practice of genealogical and historical research.

Maria Avila is the co-author of the paper Genome-Wide Ancestry of 17th Century Enslaved Africans from the Caribbean in the March 9, 2015, edition of the Proceedings of the National Academy of Sciences.

Learn more at www.Science360.gov. Follow all of the Expert Voices issues and debates — and become part of the discussion — on Facebook, Twitter and Google+. The views expressed are those of the author and do not necessarily reflect the views of the publisher. This version of the article was originally published on Live Science.