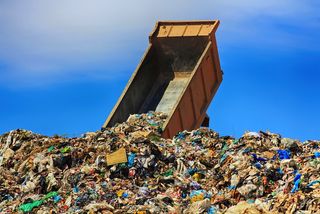 A truck dumps trash into a landfill.
(Image: © Landfill image via Shutterstock.)

Bob Lilienfeld is a waste expert with more than 20 years experience investigating and reporting on packaging and the environment. He is the editor of The Use Less Stuff Report, a highly respected and widely read newsletter aimed at spreading the benefits of source reduction. He contributed this article to Live Science's Expert Voices: Op-Ed & Insights.

Twenty years ago, the late "garbologist" William Rathje of the University of Arizona and I penned an op-ed on enviro-myths, touching on topics from garbage to the health of the planet. Our point: To solve environmental problems, we all need to work with the facts, not feel-good sound bites and myth-perceptions.

One particularly stubborn enviro-myth continues to persist: We're burying ourselves in a growing mountain of packaging waste. Having dedicated my career to helping people minimize waste, I find this belief puzzling. But let's have another look at this myth … and find in its debunking a cause for celebration.

The rise of waste?

Looking at the period from 1994 to 2012, the number of U.S. households rose nearly 25 percent. Garbage — what the U.S. Environmental Protection Agency (EPA) calls municipal solid waste — typically grows in line with the number of households and all the new "stuff" each household needs. Interestingly, EPA data indicates that waste during that period grew only 20 percent, less than household growth.

Good. That means Americans are generating a bit less waste per household than in the past.

But what's really encouraging is that packaging waste generated during that period did not increase (well, it did by 0.3 percent, basically equal to a rounding error). While overall waste increased 20 percent, packaging waste remained constant. As a result, packaging waste declined from 36 percent of our total waste to 30 percent.

This good news stands in stark contrast to predictions in 1994. Back then, the EPA stated that by 2010, packaging waste would grow by nearly a third to account for 38 percent of waste. That didn't happen. Instead, 24 million tons of annual packaging waste just didn't show up.

Where did it go? Did we start carrying everything home in old boxes and bottles? Hardly. There are two primary reasons for all that missing packaging waste.

First, remember the mantra "reduce, reuse, recycle"? Reduce comes first for a good reason: It's the best way to prevent waste in the first place. (The technical term is source reduction.) In the United States, packaging has gone on a steady and substantial diet as we transition from heavier, traditional materials to materials that are stronger and lighter, such as plastics, multilayer films and multi-material cartons.

For example, have you noticed that most plastic bottles now are significantly thinner and lighter than a few years back, easier to crush before recycling? This same phenomenon has been occurring across the packaging world, as engineers figure out how to use as little packaging material as possible.

The use of lightweight materials not only reduces waste in the first place, it also has other environmental benefits. Using heavier alternatives in packaging not only would increase the overall amount of packaging waste, a Franklin Associates study indicates that it would also increase energy use by up to 80 percent and global warming potential by even more.

The second reason for all that missing packaging waste should be a source of pride. Of all the packaging waste generated from 1994 to 2012, more than half of it was recovered through recycling or energy recovery. According to the EPA, Americans collectively removed it from the waste stream, reducing the percentage of packaging that wound up buried in landfills from 66.5 percent to 48.5 percent. In particular, the nation made significant gains in recycling rates of paper, metal, glass and plastics. [What We Recycle (Infographic)]

In total, thanks to source reduction and recycling, we reduced the percentage of packaging headed to landfills, on a per capita basis, by a whopping 39 percent — in fewer than 20 years!

While those advances truly call for celebration, there is more to be done. We should strive to "keep the molecules in play," meaning reusing and recycling packaging as much as possible. Recycling rates are growing but should be much higher.

So, feel free to celebrate notable progress this Earth Day . And let your friends and family know that you're quietly participating in a nationwide effort to dramatically reduce packaging waste.

As I've said for more than 20 years — keep reducing, reusing and recycling … in that order.​