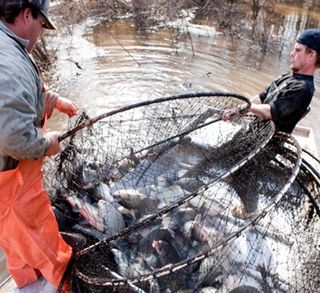 A gang of jumping Asian carp recently leapt out of the water and flung themselves at students rowing in a boat — an encounter that was captured on video.

Though it may look like a coordinated attack by an underwater army, the behavior seen in the flying-carp video was likely unintentional, a result of the fish getting spooked, according to a fish and wildlife expert.

"It's not an aggressive attack, it's an escape mechanism," Viv Shears, the director of VS Fisheries, told the BBC.

Still, that doesn't mean the fish acrobatics are harmless. Bighead and Silver varieties of Asian carp can jump up to 10 feet (3 meters) out of the water when frightened, according to the Fish and Wildlife Service (FWS).  Some carp can also grow to the size of the typical 12-year-old kid, so being hit is no laughing matter.

"Collisions between boaters and jumping silver carp have the potential to cause human fatalities," according to an FWS fact sheet on Asian carp.

Rowers from the Washington University team were practicing their strokes on the Creve Coeur Lake outside of St. Louis, Missouri, when dozens of fish started flying from the water.

Some of the Asian carp landed in the boat and a few hit the hapless rowers.

"The fish was flopping on my legs. It was so slippery that I couldn't get a grip on it," team member Devin Patel, told CNN.

No one was hurt, though a fishy smell lingered in the hull for some time, according to CNN.

Asian carp such as Bighead and Silver carp were brought to the United States in the 1960s and 1970s for aquaculture. The invading carp soon established native populations in the Mississippi River. Another Asian transplant, the grass carp, can grow to 5-feet (1.5 meters) long and weigh 110 pounds (45 kilograms). These foreign creatures outcompete native fishes for food and habitat, and reproduce quickly, according to the Fish and Wildlife Service.

In 2014, the U.S. Army Corps of Engineers proposed several methods of keeping the overgrown goldfish relatives out of the Great Lakes — including spending $18 billion to build a physical barrier between the Great Lakes and the Mississippi River Basins.

It's not clear exactly what spurred the giant fish to leap out of the water, but their jumpy behavior isn't out of character. Asian carp tend to feed at the surface of the water, where they are more easily disturbed by the sight and sound of a passing boat, the BBC reported.

In one survey of recreational fishers and boaters in the Illinois River, about three-quarters reported seeing or being hit by a jumping Asian carp, according to research presented in 2012 at the Northeastern Recreation Research Symposium.

And though the flying fish's jumps look impressive, they may not be all that unusual. It's simply that bottom feeders, such as flounder or grouper, that may get spooked and quickly zoom upward don't actually leave the water, so bystanders and boaters never see their leaps, Shears told the BBC.