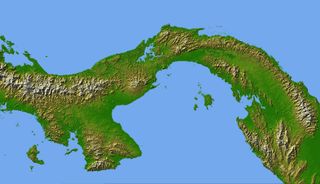 The Isthmus of Panama has been blamed for everything from triggering never-ending ice ages to bringing bizarre creatures like the terror bird and the opossum to North America.

Now, there's new geologic evidence that the narrow Panama land bridge emerged from the sea 12 million to 15 million years ago, much earlier than thought. This early uplift wreaks havoc with prevailing ideas, which suggest this strip of land established itself just 3 million years ago.

"The land bridge has been used to explain a lot of global phenomena about 3 million years ago, but what we're saying is the land bridge formed 10 million years before that," said lead study author Camilo Montes, a geologist at the Universidad de los Andes in Bogotá, Colombia.

Before the Panama land bridge formed, a deep-water channel linked the Pacific and Atlantic oceans along the equator. Closing the gap with the rise of the land bridge may have cooled the Earth's climate by changing ocean currents, thus trapping the planet in a repeated cycle of Northern Hemisphere glaciations, according to several studies. The swampy terrain also became a superhighway for animals crossing from North to South America and vice versa. [In Images: How North America Grew as a Continent]

But in recent decades, scientists have also found geologic and fossil evidence for a much earlier land bridge, sparking a controversy over when the isthmus formed and whether it actually changed Earth's climate.

In rocks exposed by the Panama Canal expansion project, Montes and his colleagues discovered fossils of land animals that suggested the highway between the Americas opened as much as 17 million years ago. But animals can hop islands, so the fossils weren't proof that a large part of the land bridge existed before 3 million years ago.

To strengthen its case, the research team has now traced the pathway of an ancient river system that once flowed across the land bridge from Panama to Colombia. The river carried a unique set of crystals, called zircons, that erupted from Panama's volcanoes and were deposited in Colombia. Coal and soil with preserved tree roots are layered in with the river deposits, Montes said.

"We know it was an environment above sea level," he told Live Science.

Now, researchers will need to find a new explanation for the global climate cooling that hit the planet about 3 million years ago, Montes said. "It also leaves open why these animals decided to wait 10 million years before they crossed the land bridge. It's quite a perplexing question," he said. (The massive exchange of species between the continents also occurred 3 million years ago.)

The findings were published April 8 in the journal Science.

The results suggest that there were no deep-water gaps along the Isthmus of Panama 12 million to 15 million years ago. Some researchers have compared the early land bridge to the Indonesian islands, where deep-water straits block migrating animals but allow marine creatures to pass.

"Pushing back the age of the Panama land bridge by more than 10 million years is noteworthy," wrote Carina Hoorn of the University of Amsterdam in the Netherlands in a commentary accompanying the study, also published in Science. "However, an early terrestrial connection reconciles an array of seemingly odd results. These events are difficult to explain if the Central American Seaway did not close until about 3 million years ago," wrote Hoorn, who was not involved in the research.