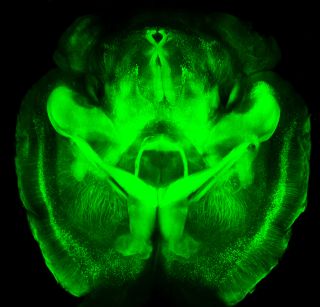 Researchers are on the verge of revealing the brain's deepest secrets, teasing out how the mind emerges from clusters of neurons and chemistry. The images below highlight some of the latest breakthroughs in brain science, and for more on what scientists expect from the future of brain research, read the related essay "Unlocking the Brain, Earth's Most Complex Biological Structure " by neuroscientist, and NSF Directorate for Biological Sciences head, James Olds.

Glial cells that appear red and green are the most abundant cells in the human brain. Cells that appear in blue help insulate nerve cell axons in the brain. Neurons appear blue. (Credit: Jonathan Cohen/NIH.)

A blind man sees New York City's Christmas lights for the first time after receiving an implant of the Argus II Retinal Prosthesis System, or "bionic eye." The development of this prosthesis built on studies of the ways visual information may reach the brain when parts of the eye are damaged. (Credit: Laura Wyant, Pascale Communications.)

A neuron is turned on by light via a technique called optogenetics. (Credit: Ed Boyden and MIT McGovern Institute)

Big picture and details, too

Researchers control a flying robot using only their minds. (Credit: University of Minnesota.)

An activated neuron in a tangle of neurons. (Credit: Ed Boyden and McGovern Institute for Brain Research at MIT.)

The design of an exoskeleton (external skeleton) that will allow paraplegics to walk again drew on basic neuroscience research. The exoskeleton uses computer algorithms to interpret the user's brain activity, which powers the exoskeleton forward. (Credit: Walk Again Project/virtualreality.duke.edu.)

Part of a mouse brain shown with a new imaging technique that physically enlarges cells and then magnifies them, rather than just magnifying them; neurons are green. (Credit: Ed Boyden, Fei Chen, Paul Tillberg.)

Only one type of brain cell — a basket cell — is selectively turned on by light via a technique called optogenetics. (Credit: Ed Boyden and McGovern Institute for Brain Research at MIT.)