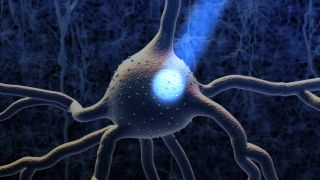 A neuron is turned on by light via a technique called optogenetics.
(Image: © Ed Boyden and MIT McGovern Institute)

Your brain is essentially what makes you … you. It controls your thinking, problem solving and voluntary behaviors. At the same time, it continuously helps regulate critical aspects of your physiology, such as your heart rate and breathing. And yet your brain — a nonstop multitasking marvel — runs on only about 20 watts of energy, the same wattage as an energy-saving light bulb.

Still, for the most part, the brain is an unknown frontier: Neuroscientists don't yet fully understand how information is processed by the brain. That's the case even in the brain of a worm, which has just several hundred neurons — nothing compared to the human brain, which has 80 billion to 100 billion neurons. The chain of events that generates a thought, behavior or physiological response remains mysterious.

Why? The brain is the most complex biological structure known to scientists. When researchers do figure out how it works, they will accomplish perhaps the greatest scientific achievement in recorded human history. [Unlocking the Secrets of the Brain (Gallery)]

A Big Bang theory for the brain

Neuroscientists all over the world are working to develop an overarching theory of how a healthy brain works . Similar to the way the Big Bang theory offers one possible explanation for the cosmos and helps guide research on the origins of the universe, a theory of healthy brain function would offer a possible explanation of how the brain and the entire nervous system work, and would help guide neuroscience research.

A theory of healthy brain function may also help to explain how injuries and diseases disrupt brain function. Such a theory could help researchers identify new directions for research on traumatic brain injuries and brain diseases.

Knowledge about healthy brain function could also help inspire the development of smart technologies that mimic some of the human brain's unparalleled capabilities. If supercomputers — which each can consume millions of dollars' worth of electricity annually, as well as huge amounts of cooling water — could match the brain's energy efficiency and processing power, their massive energy consumption would plummet, and science and innovation would leap forward.

Neuroscientists have made some progress toward understanding the brain. They have identified brain regions that regulate particular functions, including speech and motor function, and they can recognize structural and functional changes that occur in the brain throughout an animal's life span.

And recently, neuroscientists have developed advanced tools for visualizing and analyzing parts of the brain in unprecedented detail. These tools provide the first detailed glimpses of the brain, and are thrusting neuroscience forward, much as the first powerful telescopes provided the deep glimpses into the universe and thrust astronomy forward.

Building on these and other recent innovations, President Barack Obama launched the Brain Research through Advancing Innovative Neurotechnologies Initiative (BRAIN Initiative) in April 2013. Federally funded in 2015 at $200 million, the initiative is a public-private research effort to revolutionize scientists' understanding of the brain.

As part of the initiative, NSF is working to reveal how a healthy brain works. Magnetic resonance imaging (MRI) technology, bionic limbs and laser eye surgery were all grounded in early NSF-funded fundamental research, and this new research on the healthy brain could lead to equally profound advances. As a U.S. federal science agency, NSF will spend about $48.48 million on grants supporting the BRAIN Initiative, part of approximately $106.44 million in grants we will provide for all "Understanding the Brain" research across a range of neuroscience topics.

With that support, our research teams are tackling the mysteries of the brain from varied angles. They are inventing new probes to monitor and manipulate the brain; building computer models to help reveal the activities of neurons that drive thoughts and behavior; improving brain imaging technologies; and studying the nervous systems of a wide range of species.

Those researchers are also are creating the cyberinfrastructure to store and manage the "big data" generated by brain studies. This is critically important: If nanoscale images of one brain were stored in a stack of 1TB hard drives, the stack would reach to the moon, or beyond.

In addition, NSF provided 36 interdisciplinary teams with a total of $10.8 million in early concept grants, each addressing this vexing question: How do circuits of neurons generate behaviors and enable learning and perception?

One of those teams, from the University of North Carolina School of Medicine, is improving a new kind of microscope to simultaneously view individual neurons firing in two or more different regions of a brain at the same time. This microscope will enable researchers to see in detail, for the first time, how different areas of the brain team up to process information.

Taking an entirely different tack, researchers at the new $25 million NSF Center for Brains, Minds & Machines at MIT are investigating human intelligence and the potential for creating intelligent machines. As researchers learn how to build those machines, they will likely also advance humanity's understanding of human intelligence.

If history is any guide, these and other fundamental brain-research projects will have important applications. For example, fundamental research on light-sensitive organisms led to the development, in 2005, of a breakthrough technology called optogenetics for selectively turning individual neurons on and off by exposing them to light. (See an animation explaining optogenetics here.  )

Today, optogenetics, is used to study the potential roles of faulty neurons seen in Parkinson's disease, schizophrenia, depression, strokes, PTSD, addictions and some forms of blindness.

And most recently, viewers of the 2014 World Cup recently saw another important application of fundamental brain research: The first kick of the games was performed by a person with paraplegia wearing an exoskeleton which built upon NSF-funded research into how neurons are involved in motor learning — research that began nearly twenty years ago.

Across government, and across the nation, hopes are high that additional, fundamental, neuroscience research will lay the groundwork for continued advances that will help society take additional strides forward.