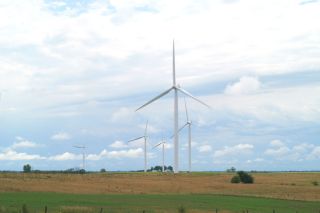 Thanks to blow-hard winds, the United States has just become the world's largest generator of wind energy.

Germany previously held this distinction, though since the United States has about 26 times more land than Germany, the milestone isn't a huge surprise. Nonetheless, we weren't expected to reach this point until late 2009.

"Our wind energy capacity is growing faster than anyplace else," said Randall Swisher, the executive director of the American Wind Energy Association, the national trade organization for the wind energy industry. "So it's no longer really alternative energy. This is very mainstream."

During the first half of 2008, the United States, for the first time, generated more wind energy electricity than Germany, despite the fact that the smaller European country still has more turbines than we do.

Germany has enough turbines to collect about 22,000 to 23,000 megawatts of power, while the United States has a capacity of about 18,000 megawatts, Swisher said.

"The difference is that because the winds are so much stronger here in the U.S. we are actually providing more wind-generated electricity than Germany," Swisher told LiveScience. "Our turbines are so much more productive that theirs."

Though we are winning the race in terms of volume of wind energy produced, we are far behind when it comes to the proportion of our total energy we get from wind.

While wind currently supplies about 1.2 percent of the United States' power, it accounts for about 7 percent of Germany's total energy consumption. And the even-smaller country of Denmark gets roughly 20 percent of its energy form wind.

Most of America's wind power is being collected in Texas (which provides more than 25 percent of the country's wind-generated electricity), the Midwest, and West Coast, Swisher said.

The main issue with ramping up our use of wind power is not a lack of wind — have you seen how gusty it gets on the plains of Iowa? — but a lack of good ways to transport that energy from where it's collected to homes and offices and factories where it will be used.

Though America's wind energy use is certainly ramping up, we still have a ways to go toward harnessing its full potential.

The U.S. Department of Energy (DOE) reported that wind has the capability to provide 20 percent of our country's energy needs by the year 2030.

Since wind is a "green" form of energy, the DOE predicted this change would lead to a 25 percent reduction of carbon dioxide emissions from electricity generation in 2030.

"We need to back away from fossil fuel and embrace renewable energy," Swisher said. "The survival of the world depends on it."